Quake as a pioneer in gaming is putting it simply. Released in 1996, id Software’s first-person shooter pushed gaming technology with its real-time 3D rendering, expanded online multiplayer with now-staple modes like Capture The Flag, and made an indelible impression on gamers with its moody, Gothic horror aesthetic. Of course, to talk about Quake’s atmosphere is to talk about one of its other leading legacies – its soundtrack.

Designed by Trent Reznor and Chris Vrenna of Nine Inch Nails, Quake’s soundtrack is sinister, industrial and unnervingly subtle. Not only did it cement the tone of Quake – it helped usher in the era of CD-quality soundtracks composed like studio albums, a far cry from the programmed MIDI and 8-bit music of the day.

We were lucky enough to have Kevin Keating from San Francisco Bay Area Concerts bring us an interview with Chris Vrenna. For more, check out this article. Join us as we shed a little light on how the video game soundtrack that forever changed video soundtracks came to be. 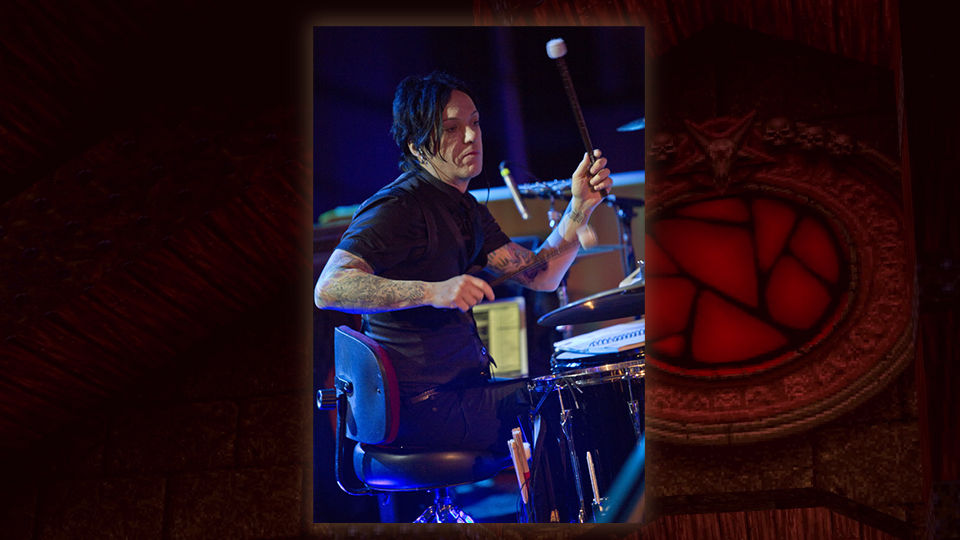 KEVIN KEATING: How did Nine Inch Nails get connected with id to score the original Quake soundtrack?

CHRIS VRENNA: So, let’s go all the way back to 1993. Trent and I had moved to Los Angeles and we were living in the famous Sharon Tate house where we were finishing the Broken and Fixed EPs and we were just beginning the Downward Spiral. Trent was a massive, massive gamer back then. We got so hooked on first-person shooter games and these were, like, the first first-person shooters.

But anyway: we’re making Downward Spiral, we’re in the Tate House, we had a PC there and Wolfenstein 3D: Spear of Destiny had just come out. That became our addiction for like a month and every morning, we’d wake up, we’d get a cup of coffee and we’d play that next level! Trent would drive and I would navigate - I’d be like ‘nope, nope, nope, it was down the hallway to the right.’

Downward Spiral finally gets done and out, and we go on tour. Trent actually got two PCs back then (I think they were 486s) and we put one in the front lounge of the tour bus and one in the back lounge of the tour bus and ran cable down the entire length of the tour bus so we could play deathmatches against each other. Trent would talk about this stuff in interviews and somehow the guys at id found out what a huge fan Trent was. Trent and I flew to Dallas to meet everybody. We went out to dinner, and it was just a bunch of nerds - famous nerds with too much money - and they asked us if we wanted to do this new game called Quake that they were working on…

Then, the game comes out and one of the weapons that they did was the Nail Gun and when you pick up ammo packs, you’d see NIN logos on the wooden crates of ammo; and that was their way of tying it into Nine Inch Nails and everything like that. It was one of those special of the moment collaborations, of two organizations that mutually respected and loved what each other did and it just kinda worked out that way. That was how the whole thing came to be: just a couple of fanboys. 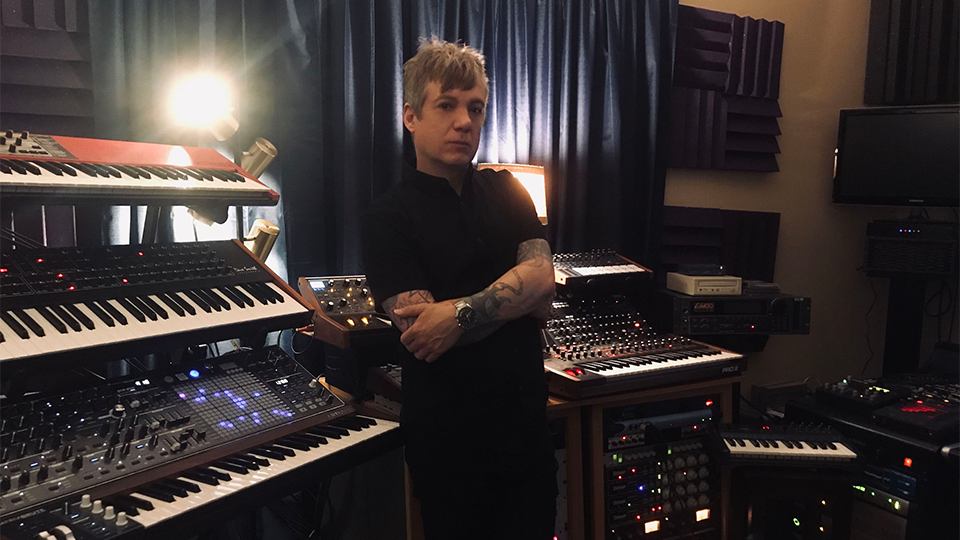 KK: How did writing/composing for Quake differ from writing/recording NIN?

CV: Game music is challenging on a couple of different levels. It’s not a traditional song, so it’s not verse-chorus-verse. You also don’t have any lyrics, so it’s all instrumental music; back then, it was something new for us.

The other thing about game music is that as you’re playing, you need to be able to hear the sound effects and those effects really tell you a lot about what’s going on in the game. We learned a lot about how music had to sit within the confines of other sounds that are needed to play the game and not get your ass murdered immediately. So that’s part one of our segue into game music.

The other part is that most music in these games will just loop. Today, most music can be full fidelity, 24-bit WAV files but back then, RAM was at a premium in the 90s’. I remember when we first got going that it was going to be an issue because everything up until this point was pretty much chip music. (Let’s call it that, I don’t know exactly how they did it.) What are we going to do, just make a drone sound 1-second long? That won’t work. And I think the compromise was that (id) can fit the music on the disc, but it would need to stream from the disc; we won’t be able to load them into memory. But Trent was like ‘that’s fine, I don’t give a s*** about that, whatever you gotta do,’ so the music will just be on the CD and players will need to keep the disc in the tray to hear the music. I remember Trent saying that they’d never get anything like Nine Inch Nails by sticking with what was done prior with respect to music capabilities. It was a breakthrough, because you were kind of listening to an instrumental, ambient Nine Inch Nails album that was made specifically to be played with this game.

The third challenge was to create something thematic that would create a mood for the game and that becomes the artistic aspect. That became the fun part, which was experimenting with drones and sound design-y stuff and real distortion sounds, everything was just mangled-sounding to create the feeling and the mood that we wanted to create.

KK: Was there awareness at the time that this all-new, original music would be breaking the mold for what was expected from videogame scores?

CV: No, not at all. We just did it because we thought it was f** cool, and we really loved id! And we were like, man, if we can be friends with the guys that did Wolfenstein and DOOM? That would be rad! 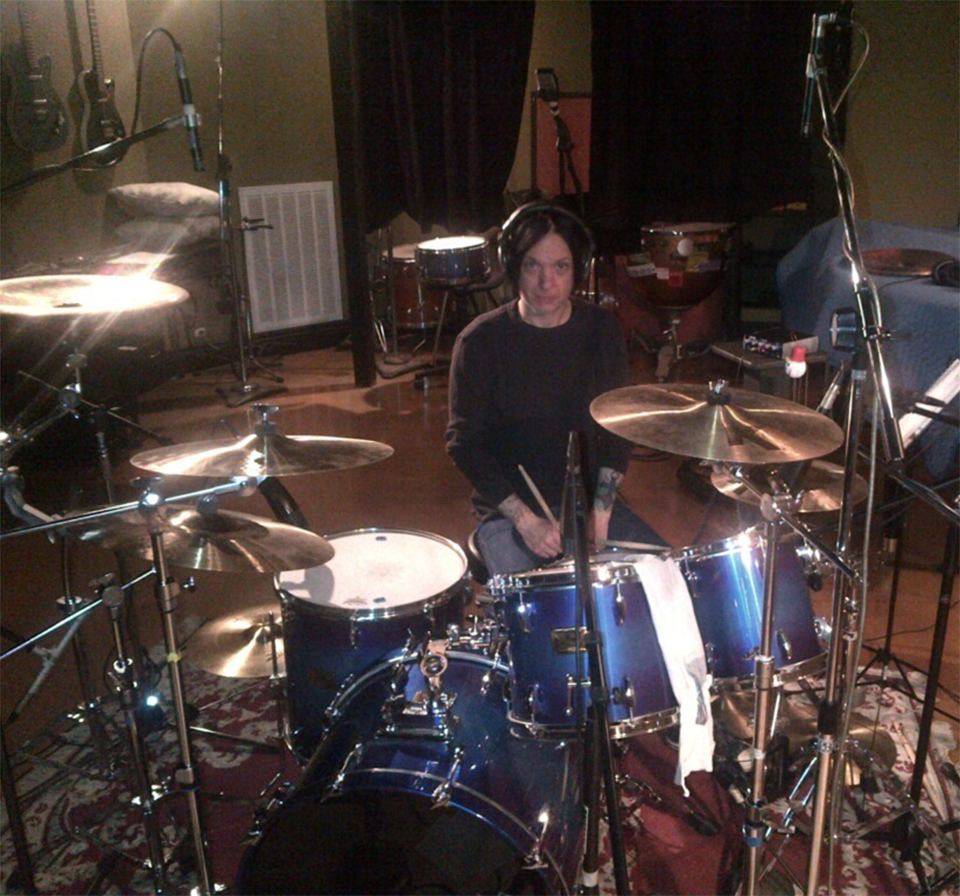 KK: Do you remember any interesting stories around the sounds that you guys came up with?

CV: Oh man, a lot of guitar droning. Running guitars through pedals and different types of effects and even through the synthesizers like the mini-Moog which has an audio input jack on it. A lot of synths have an input to process external sounds though the filter section of the analog synth, so a lot of weird drone-y stuff would be done that way.

Lots of effects has always been kind of a Nine Inch Nails thing; using lots of interesting and esoteric effects that we can get our hands on. We used the Zoom 9050, which was a secret weapon for Downward Spiral guitar sounds back in the day - super processed and super digital. Trent was never precious about, ‘well, i need a Marshall stack with a tube amp,’ he was like ‘I don’t give a f*** about a tube amp’ and ran straight into a pedal, straight into a board and let it go… ‘Perfect’

We were also doing a lot of bizarre sampling and just mangling it. During Mardi Gras one year, Trent gave me the portable DAT machine and a stereo handheld microphone and told me to just go for the day and capture sounds. We would capture all this weird shit, almost like sound designers would do for movies and games, and then just dump it into the samplers and tune it to a pitch that actually was a musical scale and that we could play it as melodies. A lot of those sounds are just hand sampled sounds that were then (scaled and mapped) across the keyboard to play in tune to a bass guitar or a piano or anything else.

That’s how all the Nails records were made back then and it worked really well for Quake. Those Quake beds are some of the coolest and scariest; when you listen to them now, they still hold up. There’s not a lot going on in them, there’s not a whole lot happening, they’re not excessively layered with stuff. Things come in at the right moment and they build and ebb and flow; they stay really subtle. I think that’s one of the reasons why they hold up so well. They’re not so overdone that it becomes a cliche or something else.

KK: How about the whispers on the Hall of Souls?

CV: Oh yeah! Dude, it’s been so long since I’ve listened to the whole thing. Yes, that was another thing we did, we wanted to put in tortured voices the whole time. So you know the main riff from the title theme and at the very end there’s this scream - that’s Trent and you can tell that it’s him.

There’s a production trick with whispers: if you do all of it yourself, it gets all cluttered because it’s the same timbre, the same voice just on top of each other. We would get each one of us on one side and two others on another side (of the mic) and then we would take some of those vocals and then flip the whole audio file backwards. Man, I forgot all about that. You’re making me remember all this stuff, ha!

KK: How does it feel that Quake is back with its official re-release, introducing it to a new generation of players?

CV: It’s nostalgic in a certain way, but it’s also cool to just see how games have progressed over 25 years – technologically, storytelling, the whole thing. I think it’s cool to look back on some of these classic games and get to revisit them - and for new people to be able to play (Quake) and to have the game complete with the original Nails score!