Super Shotguns and chainsaws are all well and good, but few demon killin’ instruments are as fine-tuned and effective as the DOOM Slayer himself. While we (thankfully) have no need to rip apart demons by hand, we can still break down the science of the Slayer’s impressive physique and see what we can apply to our own. This is Ripped & Tear!

In the previous Ripped & Tear, we peeked at the DOOM Slayer’s new armor in DOOM Eternal and pinpointed the exposed biceps that allow him to lift up (and utterly put down) the various threats in his path.

In addition to learning about the bicep’s function in lifting and turning the forearms at the elbow, we also learned that strong triceps are also a key component of Slayer-strength upper arms. What’s next? Exercises that engage the biceps and triceps to boost our own limbs. That’s right, it’s time to lift

The biceps are made of two portions – a ‘short head’ and ‘long head’ – that form a single muscle. Using context clues, you can probably guess how many are in the tricep. That’s right it’s three, with the short and long head joined with a ‘medial’ head portion of muscle. To properly work out both parts of the arm, we’ll need good routines that feature both flexion (movement that decreases the angle of the arm) and extension (movement that increases the angle). So where’s a good place to start? 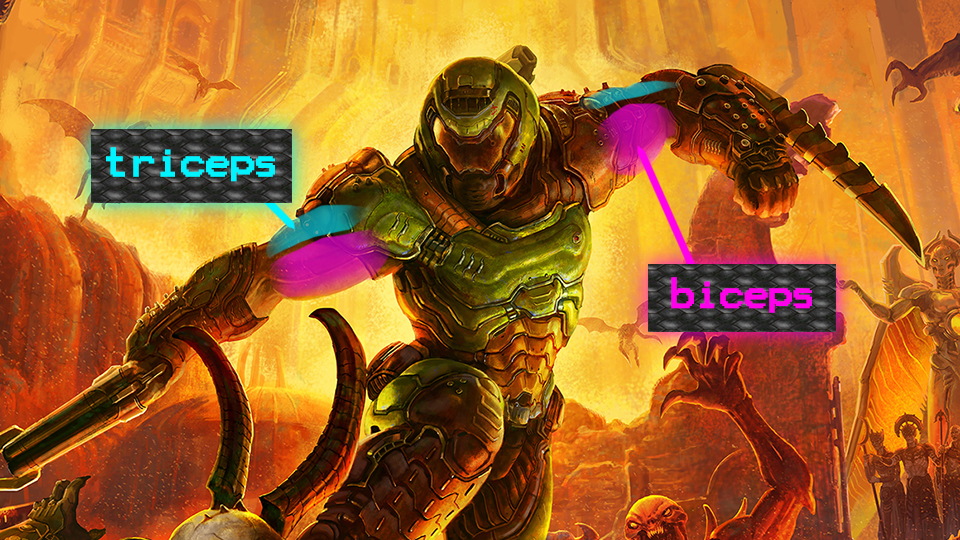 Press and Curl, until it is done

For tuning up the triceps, our fitness consultant Phil Durity recommends the classic chest press. Using a bench, grip a barbell overhand, shoulder-width apart, above the sternum and perform three sets of lifts, decreasing the rep count slightly with each rep. Another tricep-targeting exercise is the overhead extension. Hold a single dumbbell behind your head, holding the weight with your palms flat and elbows in tight. From there, raise the dumbbell over your head, extending your arms fully for approximately four sets of eight to 12 extensions.

As for bulking up our biceps, Durity recommends another classic – the dumbbell curl. Holding a ‘bell in each hand with palms facing out and arms aligned with your waist, lift up to your chest and count to three before releasing. To reduce the chance of injury, engage your hardened core from our last R&T lesson to keep weight from shifting entirely on your back. An alternate exercise that also engages the forearms is the hammer curl– the motion is identical as the regular curl, but with a neutral grip facing toward the midline than outwards.

While you may not need your arms to bear the full weight of a Gauss Cannon in your day-to-day, we at least hope these exercises inspire you to take a note from the DOOM Slayer’s book and free your upper arms from the tyranny of sleeves.

DISCLAIMER: Always consult your physician before beginning any physical fitness regimen or rigorous activity. Stop immediately if you feel faint, dizzy, pain or shortness of breath while exercising. This series is intended for entertainment purposes and does not replace the advice of healthcare professionals. ZeniMax Media and its partners are not responsible for any injuries that may occur from attempting exercises shown on this website.