Welcome back to another DOOM edition of Nods to Mods, where we sit down with community creators to get a closer look at their process!

We’re so excited to be featuring modder valkiriforce for the first time! Known for his mid-90’s ‘DOOM The Way id Did’ approach to level design, he’s no stranger to the scene, winning a Cacoward in 2011 for ‘Reverie’ and earning recognition in the Special Features sections of the Cacowards in 2020 for ‘Akeldama’. Valkiriforce’s Anomaly Report Add-on is available now for our release of DOOM (1993) and DOOM II, featuring a campaign-sized experience across 32 levels! Check out our interview below to learn more how this Add-on was made. 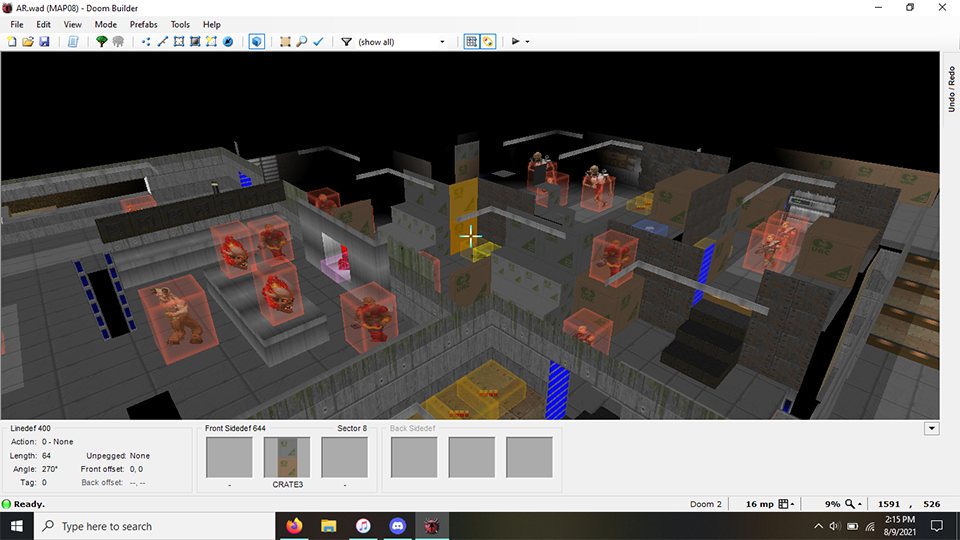 SLAYERS CLUB: What was your main inspiration for Anomaly Report? Had you always planned it to be a full 32-level megawad??

VALKIRIFORCE: Anomaly Report began as a side-project that I could work on any time I had nothing better to do – I actually had a bigger project in the works but I was hitting roadblocks with it and the simplicity of this project was producing much greater results. It quickly began to take over as my main objective and I really enjoyed letting the ideas come more naturally within the context of the original DOOM games. It was definitely influenced by my love for that same easy gameplay, and I wanted to make something that could be picked up and played quickly in the same way.

Besides my influence from the original DOOM games, I also really liked to see other people’s attempts at making classic-style gameplay in the form of ‘DOOM The Way id Did,’ where people were going for a minimalistic appearance while still playing very well. There’s been a big push on my end to always try and do something different than what I’ve done in the past, but there was something refreshing about returning to that same simple concept of what makes DOOM so great, and I wanted to play on those strengths without trying to break the engine.

SLAYERS CLUB: Tell us about the amazing cloud-filled and super realistic blue sky box textures (and even sometimes red) seen throughout so many maps!

The first map idea I had for this set, I imagined something like a valley plain with mountains and blue skies and clouds to go along with it. So, I went looking through my collection of photos and decided to cut-out some landscape photo I took in central California. I combined that with a cloud sky panorama I had already created some time ago and I had to sharpen the detail of the mountains because it came out looking blurry against the pixelated texture of the sky. Thankfully, it seemed to translate really well and I loved the effect it had on the rest of the set. 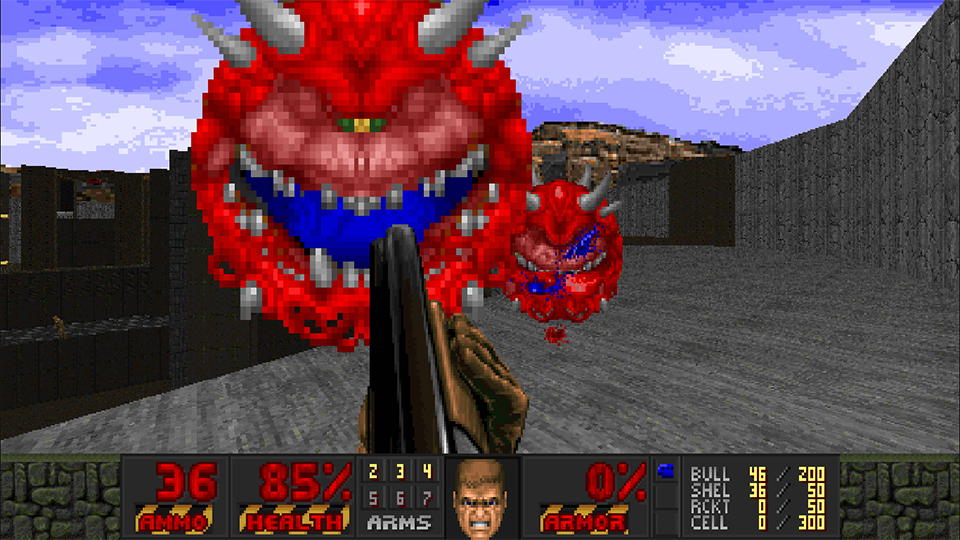 It used to be I had a space theme and a hell theme going on with the following episodes, but I loved the landscape appearance so much that I decided to make all the episodes use it. I made a red sky and night version, basically, and it continued to inspire my work going forward.

V: There are so many different ways to approach making a level, but the biggest factor for me is that I need to be having fun while making it. I always imagine that fun will in some way translate to the game itself, hopefully, and that players will sense that the person who made it must have had some fun with it. I go through a list of potential map names and often study map layouts of other existing creations, including the original DOOM games and all the work of the community. It can be a lot of fun coming up with these designs in sketch books or otherwise – quite often I just make them in the editor and see what it looks like as I’m piecing everything together.

Map titles are very important to me because they help to give personality to the maps themselves. There was one point I was working on something called Twin Tales, and it was going to be two castles joined by a bridge in the middle. I started to create something that was crystal-shaped in the northern portion of the map, and it gave me a new idea for a title – Diamond Apocalypse. I later scrapped that map, kept the title and created another fortress and even threw together a set of textures to create a 3D-looking diamond that you blow up at the end of the level. It felt like something that was much bigger and more exciting for me so I couldn’t resist those ideas. 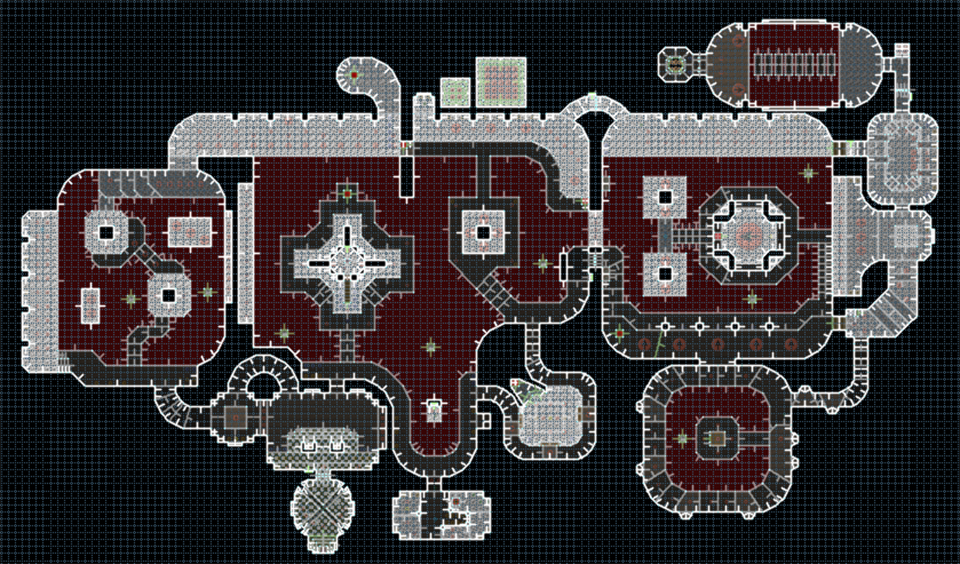 Another big part of it for me is the map’s layout – I always get a kick out of seeing other people’s layouts with the appearance of lines, winding staircase formations and multilayered platforms. It’s especially interesting if you haven’t played the map, because it leaves me guessing what everything might look like in-game. When playing these levels, sometimes it’s wildly different than I imagined but those first ideas I had could be the seed of inspiration I need to make my own little adventure.

I do feel this set was very much defined by the skybox I created for it. It’s amazing just how much I felt inspired to make more maps based on that simple idea. It sets the mood for the atmosphere, and I found myself often making maps that have plenty of open views just so I can enjoy the sight of it. I also have to mention the music – it definitely affects the mood and the outlook on what is or what could be happening in a map. Suspenseful music could produce suspenseful encounters and action-packed soundtracks could lead to an all-out action affair. Honestly, there’s no shortage of ideas to be thrown around for how the ball gets rolling for these kinds of projects.

SC: How did you go about finding and securing so many great pieces of music from so many well-known MIDI makers from the community?

I have such tremendous respect for all of the musicians involved – so much actually that I always felt forbidden from using their work in my maps. I felt like I didn’t want to take away from the original context for where these songs appeared the first time in so many classic 90s’ DOOM wads. It was over time, though, from seeing how often other people had used their work, even in big projects like Valiant using at least a song or two from Mark Klem, that convinced me to give it a chance in this project.

Just about everything in it was coming out of my love for those older DOOM experiences I cherish so much, so I thought this could be a good place for using them. It would be faster than asking for new and original material and it would see a much quicker release. Everything about this project felt pretty fast to me, and it seemed like the right path to take at the time. I’m very happy to see that most people in the community seemed to be pretty happy about it as well.

SC: Tell us a bit about how you came to utilize gallieo31dos01’s awesome custom status bar!

V: That status bar was originally created to go with one of my previous projects called Akeldama, but I was suddenly sent a new status bar from Gothic that greatly fit the aesthetic of the project. I felt sorry about thinking of replacing it, but I later posted it for everyone to see and decide what might look more fitting for the project. I was glad that even though we didn’t get to use the status bar in Akeldama, it found a new home in this project.

SC: What tools did you use to create this 32-level behemoth?

V: I used Doom Builder 2, XWE and Slade3. I’ve been using Doom Builder 2 since 2009, although I did take a sneak peek in Doom Builder X, I think, for the visplane explorer at times.

SC: How long did it take you to complete this massive megawad?

V: Surprisingly, 11 months! The project started on May 7, 2021 and finished at roughly the end of March 2022. I posted the release thread some days later going into April. 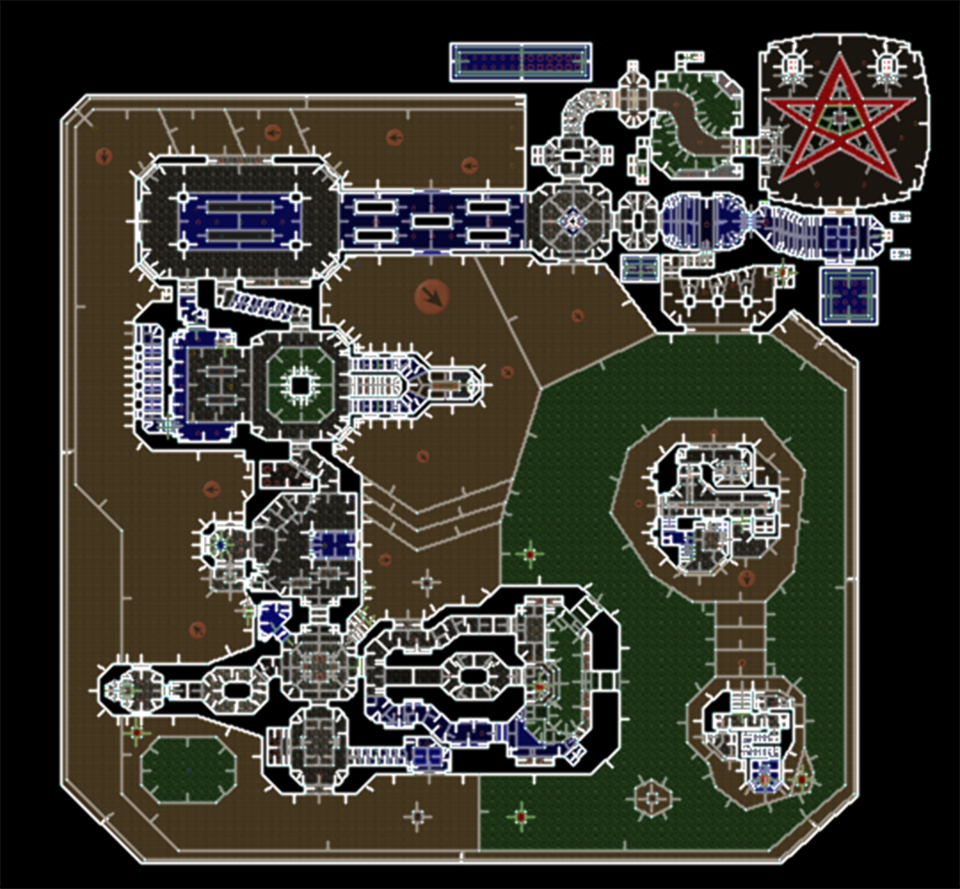 V: I have to mention Jim Flynn for his incredibly unique style – I’ve always wanted to make something that would be like a mainstream version of his work with the same kind of interconnected rooms and traps, as I always felt he deserved more credit for his brilliant designs. I also greatly appreciate Dario and Milo Casali’s designs in The Plutonia Experiment, as they have that simple yet elegant design that works so well and gives the player a good challenge.

I also want to mention Big Ol’ Billy for his playful approach to level design, and it reminds me of how much DOOM can be toyed around with and experimented upon with unorthodox ideas. Honestly there’s so much talent in the community, it can be hard to keep up with.

V: A big thank-you to all of the musicians – Mark Klem, David Shaw, Jeremy Doyle, Tom Mustaine and Charles Li. Thanks to all those who helped out with playtesting in the community thread and otherwise, and to galileo31dos01 for that cool new status bar. And a very, very big thanks to all of my close friends who helped and supported me along the way – whether directly or indirectly - FreezingIceKirby, waverider, surferbrg, KazeChan, TeraDex, DaCableGuy, It’s-a Me Megatron, MaritoBurrito, Wingless, Emperor Andross, Krackie, Raf, Gawain, BigBoy, Nineroe, 40oz and all of the DOOM fans out there who are keeping the flame alive.