IMPORTANT UPDATE: The standalone DOOM Eternal Official Game Soundtrack, which forms part of the DOOM Eternal Collector’s Edition, will not be available on RELEASE ON March 20, 2020. Bethesda intends to deliver the Soundtrack as soon as possible after the release date and will update its official channels as soon as the DOOM Eternal Soundtrack is available. For more information, please read Bethesda’s full statement: https://bethesda.net/en/article/SMiPiyHwylYKs7ikHn1Pp/update-on-doom-eternal-official-game-soundtrack

ATTENTION SLAYERS: The release date for DOOM Eternal has changed to March 20, 2020. Learn more in the official announcement from id Software here.

Hell strikes again when DOOM Eternal brings the DOOM Slayer’s crusade against evil to Earth November 22. You’ll need to be prepared for the biggest, bloodiest and most badass DOOM experience that awaits, and there’s no better way to ready up for DOOM Eternal than the DOOM Eternal Collector’s Edition – now available for preorder! 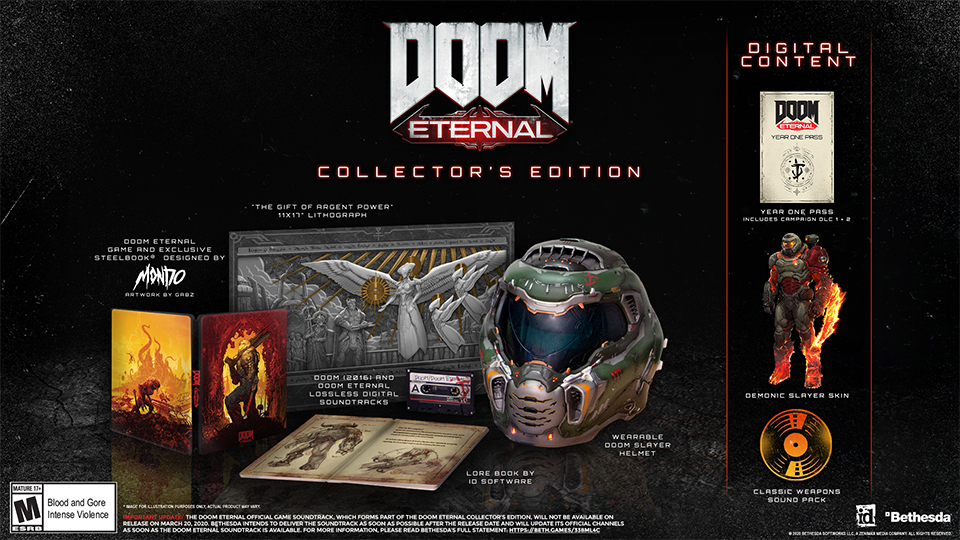 The ultimate bundle for any DOOM fan, the Collector’s Edition contains a Deluxe Edition copy of DOOM Eternal and an incredible assortment of goods highlighted by a wearable DOOM Slayer’s helmet – a sight that makes Hell itself shudder in fear!

The DOOM Eternal Collector’s Edition is available to pre-order at participating vendors and the Bethesda Gear Store starting today, but don’t hesitate – quantities are limited and orders are first-come, first-served. Pick up yours today and prepare to Raze Hell when DOOM Eternal launches November 22!

Developed by id Software, DOOM Eternal is the direct sequel to DOOM, winner of The Game Awards’ Best Action Game of 2016. Experience the ultimate combination of speed and power as you rip-and-tear your way across dimensions with the next leap in push-forward, first-person combat. Powered by idTech 7 and set to an all-new pulse-pounding soundtrack composed by Mick Gordon, DOOM Eternal puts you in control of the unstoppable DOOM Slayer as you blow apart new and classic demons with powerful weapons in unbelievable and never-before-seen worlds.

For a look at everything Bethesda revealed at this year’s Showcase, head to: Bethesda at E3 2019