Welcome back to another DOOM edition of Nods to Mods, where we sit down with community creators to get a closer look at their process! We’re so excited to be featuring modder Thomas van der Velden for the first time! Thomas wasn’t afraid to step into the community limelight in 2001 with Revolution!, an amazing campaign-sized megawad with compact level design and awesome architecture.

“It is incredible that (Revolution!) still gets attention after all these years,” says Van der Velden, who won a Cacoward for the mod from Doomworld’s Top 10 WADs awards in 2001, with prolific DOOM modder James Paddock giving the official MIDI soundtrack a brand-new overhaul for this release 15 years(!) later.

“I never expected this hobby project would receive such praise and am very grateful,” says Van der Velden. “Having it validated by id Software now is the ultimate icing on the cake!” Revolution! is a free 32-level, campaign-sized Add-on for the re-release of DOOM & DOOM II, available now. 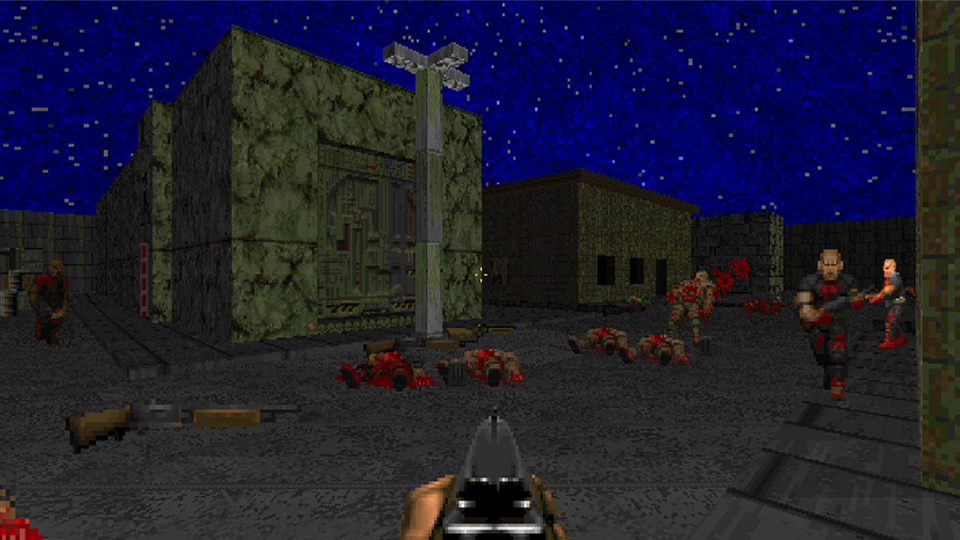 SLAYERS CLUB: What was your main inspiration for Revolution! ? Had you always planned it to be a full 32-level megawad??

THOMAS VAN DER VELDEN: The main source of inspiration was DOOM (1993) itself. Since the first time I played it in 1994, I was hooked. It was (and still is) incredible. The engine, graphics and level design were beyond anything else at that time. It is still the most immersive game I know. Every time I play, it feels like home.

Years later, I got a floppy disk with an editor and after many hours, (there was neither a manual nor the internet) my brother and I managed to get working maps. After a few dozen separate maps, I wanted to make a full mapset. Revolution! was made in 1999 ‘til 2001 as an homage to classic DOOM. By that time, the internet had become accessible for most people. It was the perfect timing to spread a DOOM mod.

SC: We always must ask when modders take on a full 32-level megawad… Was this more about a challenge for yourself to complete a full game’s worth of levels, or was It more about telling a story that lends itself well to fit a longer length?

TVDV: It was an artistic hobby. Making maps put me in a creative mindset were ideas kept flowing. Back then, I was a student living the most carefree years of my life. I made it without game design experience and without any expectations of a big audience. Sometimes it was challenging, but it never felt like work.

As people get older, we become more careful and overanalyze things. We lose that youthful naivety to do what we love without worrying about how to do it, or what others might think of it. Playing through the maps is like learning from my younger self. I went through my old drawings and uncovered artwork I made in 2001-2002 inspired on Revolution!. It is crude and flawed, but it captures the story of the lone marine fighting the god of Chaos. 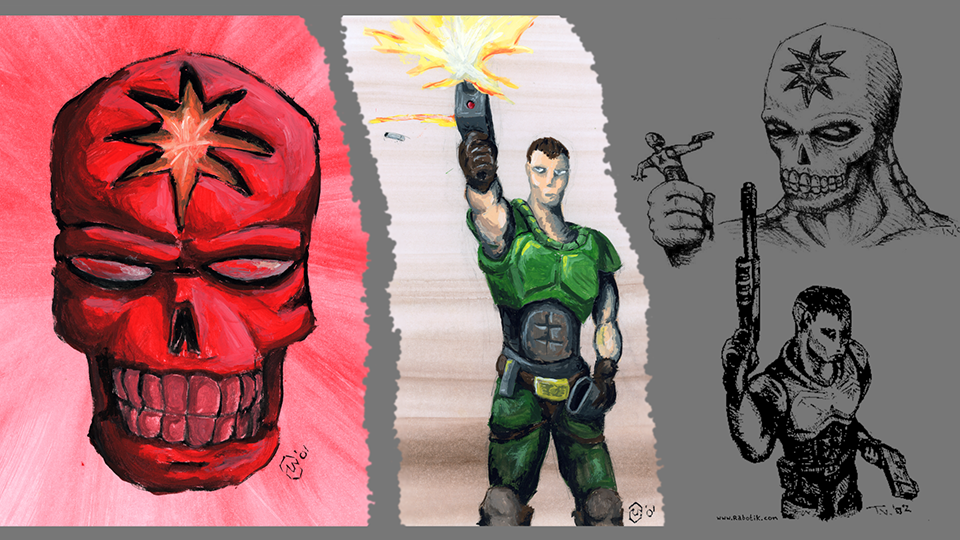 SC: You’ve been given a lot of praise for your compact level design and awesome architecture. Where does that inspiration come from, and what is your individual approach to level design?

TVDV: My computer was old (even for 2001) and would crash when the maps got too big. Levels had a limited amount of lines/sectors I could use, so I had to make every one of them count. This is why it ended up compact. Because I worked with the same technical limits as the original DOOM, it truly feels classic.

I wanted some maps to represent real-life places, so I had to be creative and figure out how to present them with limited sectors. This style has a charm of its own and is known in the DOOM scene as “Doomcute”. Each map has a unique idea/setting to set it apart from the others, yet they all feel connected because of the mapping style and because each map starts where the previous one ended.

SC: Tell us a bit about how the new textures, sprites and flats used!

TVDV: Revolution! uses mostly original DOOM II textures. I made some custom graphics to make it feel fresh and help to tell the story. Back then, I had very little experience with digital art and game design. This was a starting point and after Revolution!, digital art became my main passion. One notable later project is Harmony, another DOOM mod which has all-new artwork. 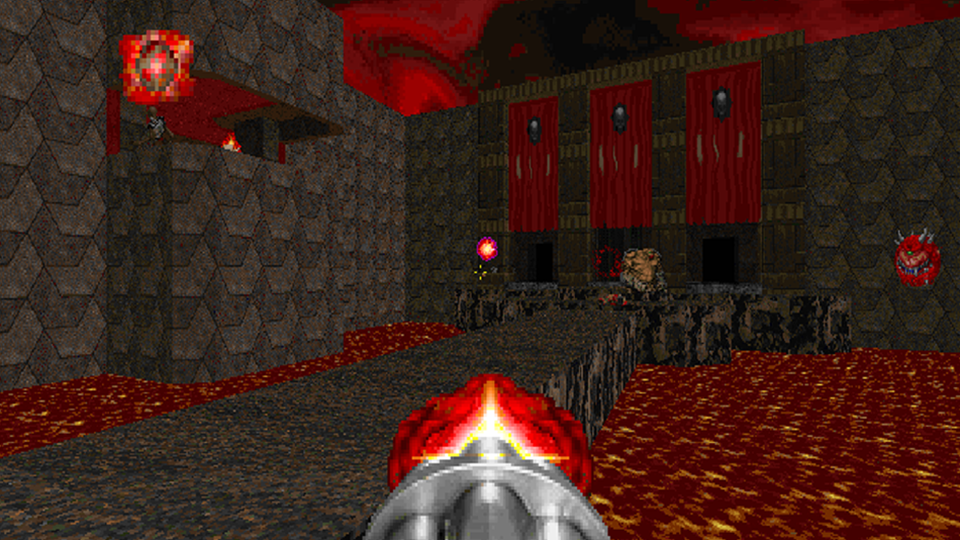 SC: Revolution! also gets a lot of praise for the MIDI tracks heard throughout. How did you go about selecting them?

TVDV: In 2016, James Paddock ran a project to create a full MIDI soundtrack for Revolution!. He assembled a talented team and they did all the work.

I feel honored that people used my work as inspiration for their own. To complete the circle, I made a bonus map33 inspired by the project.

SC: What tools did you use to create this 32-level behemoth?

TVDV: It is long time ago, so I had to check the original txt file from 2001! (I used) DEU2 and IDE for mapping, NWT for importing textures and DeuTex/DeuSF for importing sprites. In 2021, I made minor changes to a few maps in Ultimate Doom Builder. I made updated screens with GIMP and Inkscape. Imported with XWE.

SC: How long did it take you to complete this massive megawad?

TVDV: It was made in my spare time in 1999-2001. Some maps took weeks and the fastest (map31) only a few hours. All the maps are short for today’s standard, so maybe the word ‘massive’ can be a bit misleading. 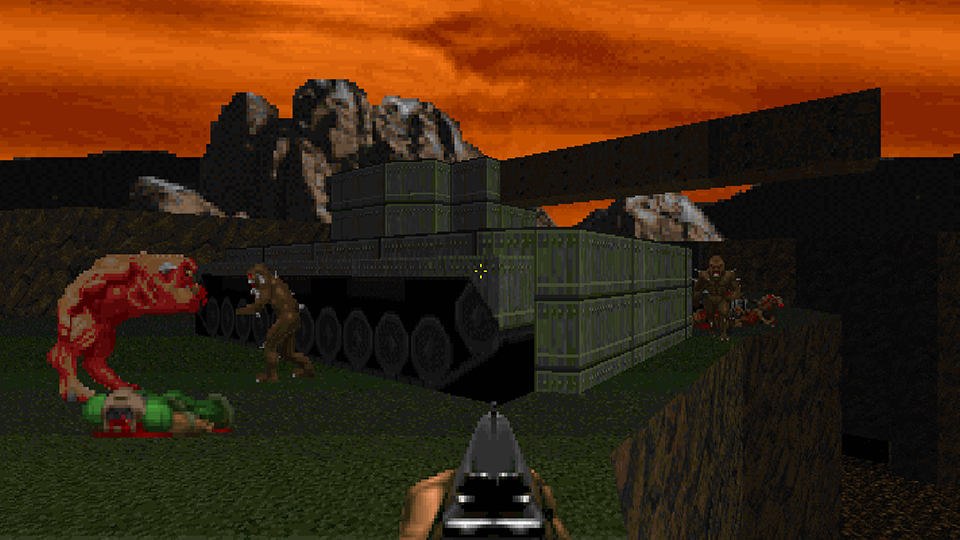 TVDV: I have to admit, I am a bit out of touch with the modern scene, so I will only name a few veterans that inspired me back in the day: Justin Fisher, who made the Aliens TC, and ACE Team Software, who made Batman Doom.

TVDV: Space is Green, who made Sci2.wad and uses DOOM for artistic projects like Delaweare. His amazing artwork can be found on www.spaceisgreen.com. James Paddock, who makes awesome music and helped to make this 2022 release of Revolution! possible. Metabolist, the first one to review Revolution! and help get it the initial positive attention, and id Software for making DOOM, the best game ever! Also, Rabotik, my own website with my artwork.

Special thanks to the entire DOOM community, including speedrunners and demo scene. I still get emails every now and then with heart-warming compliments. You guys are awesome!