We’ve always got an eye out for incredible fan creations here at the Slayers Club, and we couldn’t help noticing when UK cosplay creator Isa brought out a full recreation of DOOM Eternal’s Slayer in full armor to EGX in London late last year.

We were also lucky enough to get some of Isa’s time to learn the process behind this impressive build, as well the challenges she overcame adapting the Slayer’s battle-hardened digs to cosplay. Enjoy!

What made you want to make the DOOM Slayer armor?

Being someone who loves armor crafting, but has mainly made fantasy or historical-inspired armor, the DOOM Slayer felt like such an interesting and different challenge to take on.

The level of detail in the suit, the bulkiness of it and painting something with a gritty colour scheme - having just made several more bright and colorful costumes - were all things that drew me to the build. 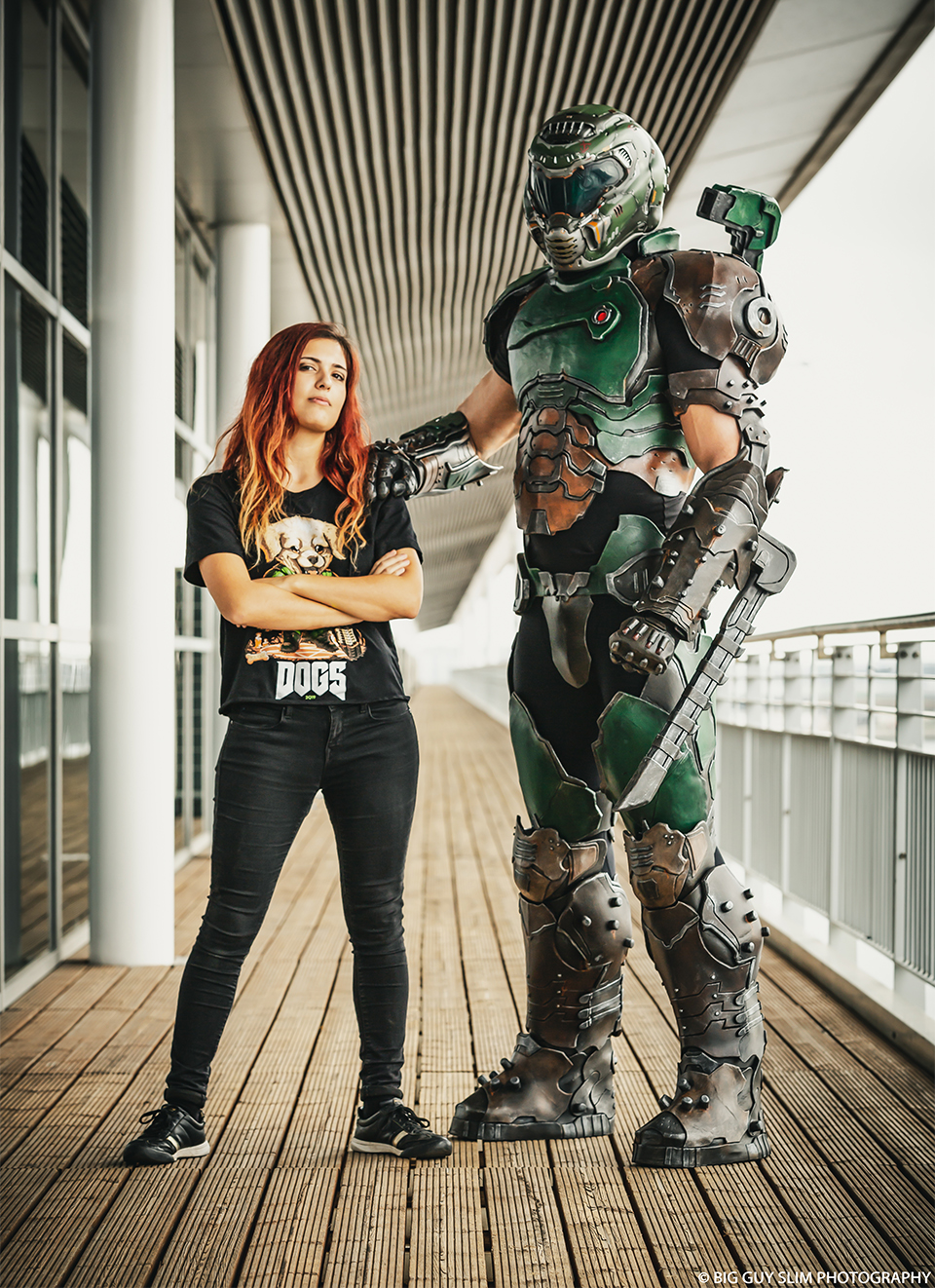 Usually I make these costumes for myself but in this case, it seemed right to make the suit to be worn by someone with a body type befitting of the character. So enter Matt, the model who wore the costume at EGX, who looks like a real life Space Marine before you even put the armor on him. (No, I didn’t build platforms into the shoes. Yes, he really is that tall).

What were some challenges you faced while making the costume?

The main challenge of making the DOOM Slayer suit (or any costume from a video game, really) usually lies in transferring the design from a game character model to a wearable garment for a real person in a way that remains accurate to the design, but allows as much movement and comfort as possible to the wearer. Comfort is usually the first thing to be sacrificed in this case, unfortunately – but hey, sometimes you have to suffer for your art, right? 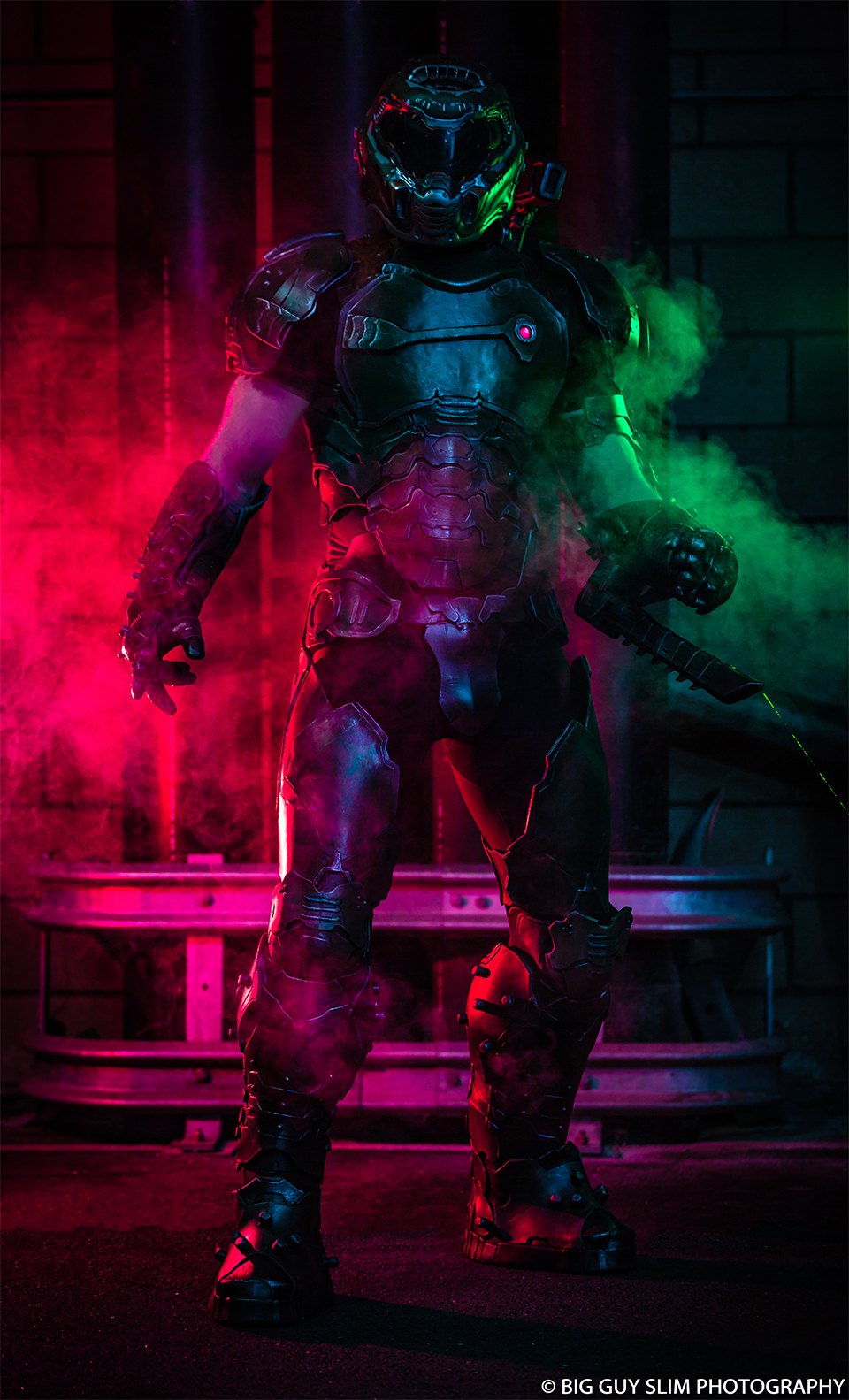 There are things you can do to mitigate this, such as knowing where to place gaps and seams in the design and how to attach different parts in different ways at points of the body that will require the most freedom of movement.

Sometimes it isn’t possible within the design, but if you can give yourself as much freedom of movement as possible, are aware of things you can’t do in the costume (e.g. sitting or crouching) and how long you can keep it on for before you need a break, you’re winning.

What’s your next project?

I usually have multiple projects on the go or in the works. Cosplay-wise, I’m currently working on my own twist on Nott the Brave from Critical Role – taking inspiration from ancient Persian armor and working it into my own take on her design.

Currently, I’m mainly producing and facilitating theater and puppetry education projects based on the Czech opera Brundibar. This is all with the view to produce and design a full production of the piece as a double bill with another opera from the same time period – The Emperor of Atlantis – in 2021.

And finally, if I didn’t have enough to do, I play Elyse the Storm Sorcerer in NyxRising’s Dungeons and Dragons actual play series, Life of the Party. I also designed and painted our set!

A big shout-out to Isa for taking the time to talk with us, as well as Big Guy Slim for the awesome photos. For more of her cosplay work, check out her Instagram and Twitter!