The time has come for DOOM aficionados to enjoy another new Add-On for our re-releases of DOOM (1993) and DOOM II: DOOM Zero! This mighty megawad, created to commemorate the 25th anniversary of DOOM II, was created by Christopher Golden, a 35-year-old modder from Krugersdorp, South Africa who helmed this project solo(!)

We got some time to talk shop with Golden about DOOM Zero, modding and game design in our exclusive Slayers Club interview below. Enjoy! 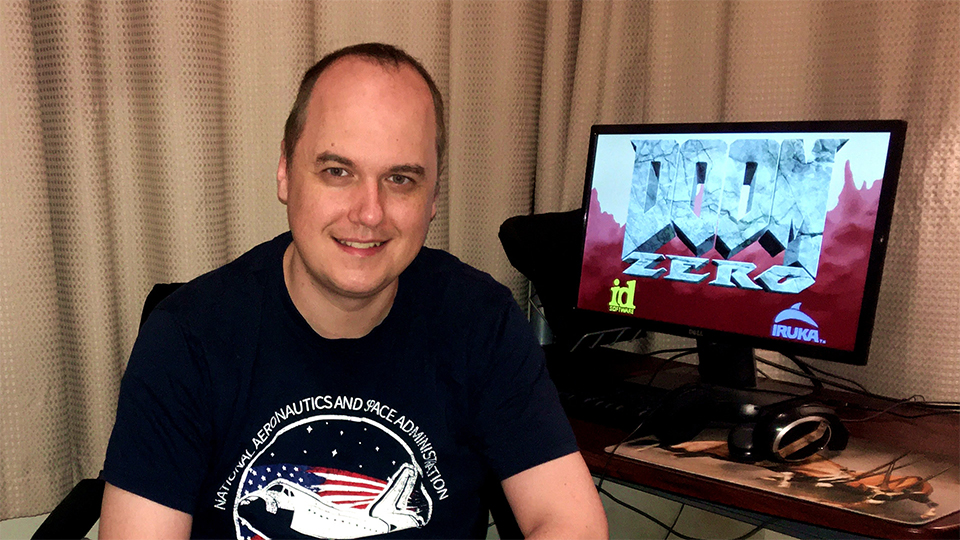 SLAYERS CLUB: What was your main inspiration for DOOM Zero?

CHRISTOPHER GOLDEN: When I was a kid, and even as an adult, I enjoyed playing titles like the first Tomb Raider, the DOS version of Prince of Persia and King's Quest: Mask of Eternity. Although I found the combat to be the worst part of those games, I still enjoyed them because of their puzzles and platforming.

I wanted to combine my love for non-cryptic puzzle solving and platforming with DOOM's fun combat. Many have said those elements don't work in a first person shooter, but I think the recent DOOM games and Valve's Portal series tell us otherwise. 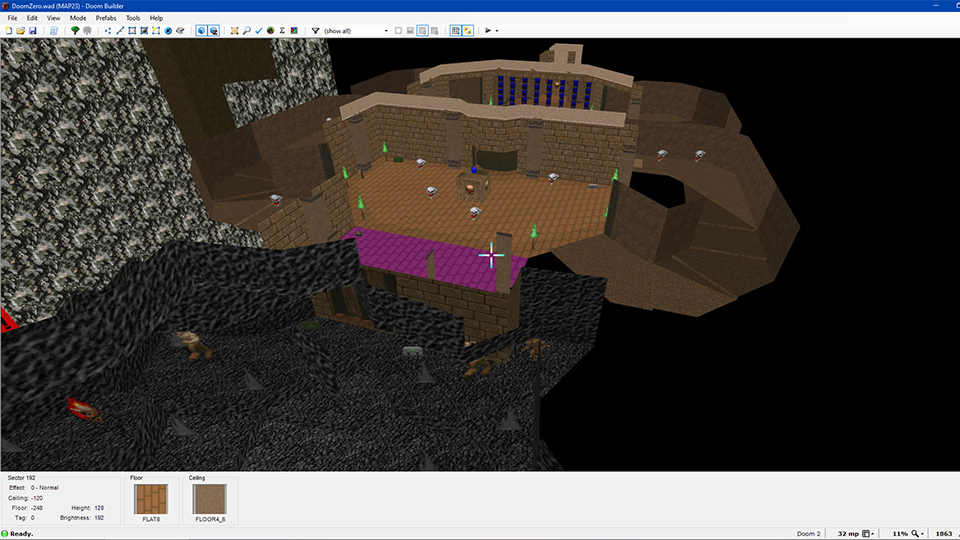 SC: What was your first experience with DOOM?

GC: I’m one of the lucky ones that played the first game back when it was relatively new, although I had to play it on someone else’s computer because I didn't have a PC that was capable of running it until a few years later, when I got a hand-me-down 486 from an uncle. Not long after, I figured out how to hook up 2 machines via a parallel cable (not even ethernet) and spent many days playing co-op and deathmatch with a friend when he brought over his 486 PC.

GC: I tried to make a game all by myself but I find programming to be tedious and exhausting. Modding was the closest thing I could do to making my own game. It’s a lot fun and while it generally doesn’t pay the bills, I was able to form a game company with a very experienced programmer. I'm not currently working on a new mod because I'm now putting in all of my time working on a new game that I think those that enjoyed my previous mods will like. 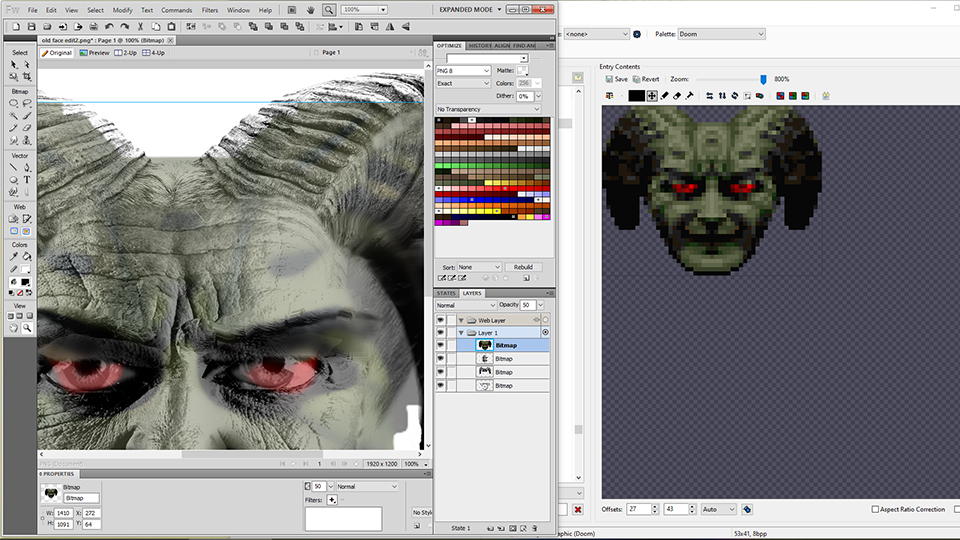 SC: How long have you been making DOOM mods/levels?

GC: Since 2010. My first mod was very rough around the edges because of how labyrinth-y and confusing it was for playtesters, but it was a good learning experience and I continued to improve my skills until 2016, when I felt I was ready to do a full megawad which eventually became DOOM Zero.

SC: How long did it take you to complete this beast of a megawad?

GC: Two years. The last third of the game was done in four months because of my goal of finishing it in time for DOOM II's anniversary, but the later levels were not compromised. By that point I understood everything well enough to get it done much quicker and make a lot fewer mistakes...and also by reusing and modifying a map I made back in 2011.

SC: Tells us about why this was important to come out around the 25th anniversary of DOOM II?

GC: DOOM Zero was made to run on the original DOS version of DOOM II, but I also think DOOM II is probably just as important of a release as the first game. A lot of the biggest, most iconic things that people love which are synonymous with the franchise, like the Super Shotgun and the Archvile, were introduced in DOOM II.

Another reason why I wanted to release it on that day was because I had already spent two years working on DOOM Zero, so I set a goal to release it for a special occasion so that I had the motivation to get it done soon and not have it be stuck in development for another two years. 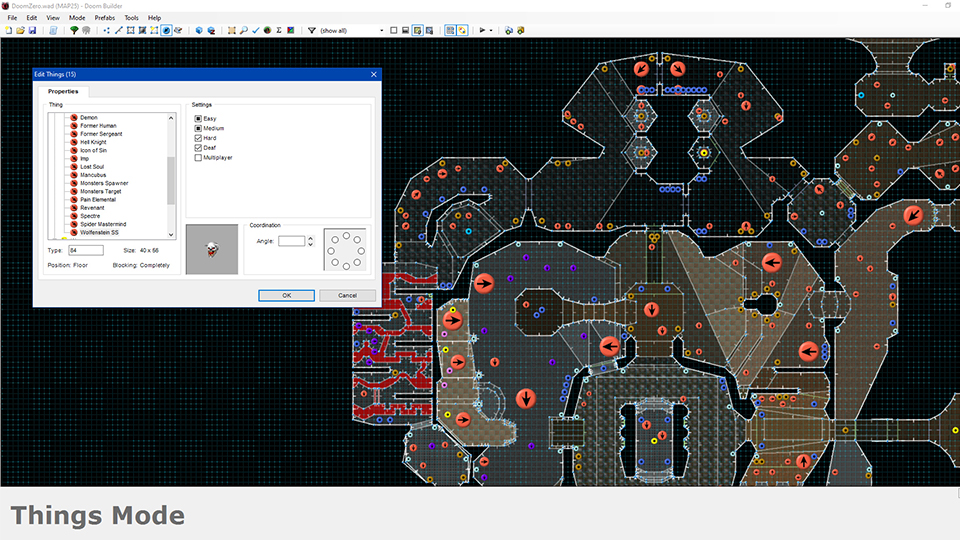 SC: How big was your team to make DOOM?

GC: Just me, but I've had people help with the development of a mod in the past, like with my Key to Freedom mod for Amnesia: The Dark Descent. Another surprisingly big help is the feedback I get from gaming communities. "Let's Plays" are extremely useful for helping me find bugs or bad design choices that wouldn't have been brought to my attention otherwise. This is also the approach I took when developing DOOM Zero.

GC: I'm all about software that is fast and efficient, and it does not have to be the most popular or full of features. I used good old Doom Builder 2 for the levels. For sound, I used Nero WaveEditor because I find the interface to be precise and snappy. It is an outdated and discontinued software, in which case I use Audacity for everything else.

For custom graphics I use Adobe Fireworks just because it requires one or two fewer clicks of the mouse button than doing the equivalent in Photoshop, GIMP or others. Admittedly, another product that's been discontinued. 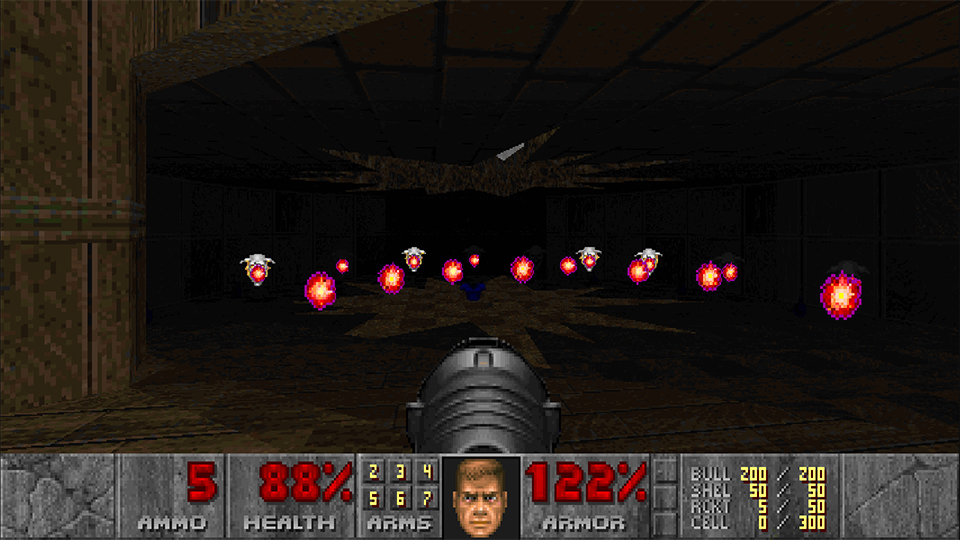 GC: I wasn't going to have much new content in the game initially, but I really wanted to introduce a new monster when I was about two-thirds into its development just to keep things fresh for players. Fortunately, there were some perfectly suitable, unused, prototype Lost Soul sprites from an alpha build of DOOM (1993) that I could use. All it needed was some clean-up for its death animation. I named this new monster the Alpha Soul.

The Demon Witch (a name I chose for the final boss), much like the Archvile, Baron and Icon of Sin, started as a DOOM (1993) sculpture texture to act as foreshadowing for the character. To create her, I enlarged the texture to use as a template and then I modified an image of an old lady's face to match the template's proportions. Some clean-up paintwork was needed especially when adding another frame of animation.

The changes to the Plasma Rifle was the result of me noticing that a lot of players generally chose not to use it very often, if at all, once they pick up the BFG. Maybe the BFG was just more fun to use, perhaps? So I tried to make the Plasma Rifle slightly more appealing to use by adding a (subjectively) more satisfying pulsing firing sound effect rather than the blaring "WAA-WAA" sound that it used to make. I also got rid of the cooldown animation just to help it feel more nimble.

I didn't want to change too much and mess with the game's balance. The idea behind its visual design was that it looked a little like the missing link between the Plasma Rifle from DOOM II and the one seen in DOOM 64 or even Quake 3's Plasma Gun, with its distinct copper pipe protruding out the left side of the weapon. 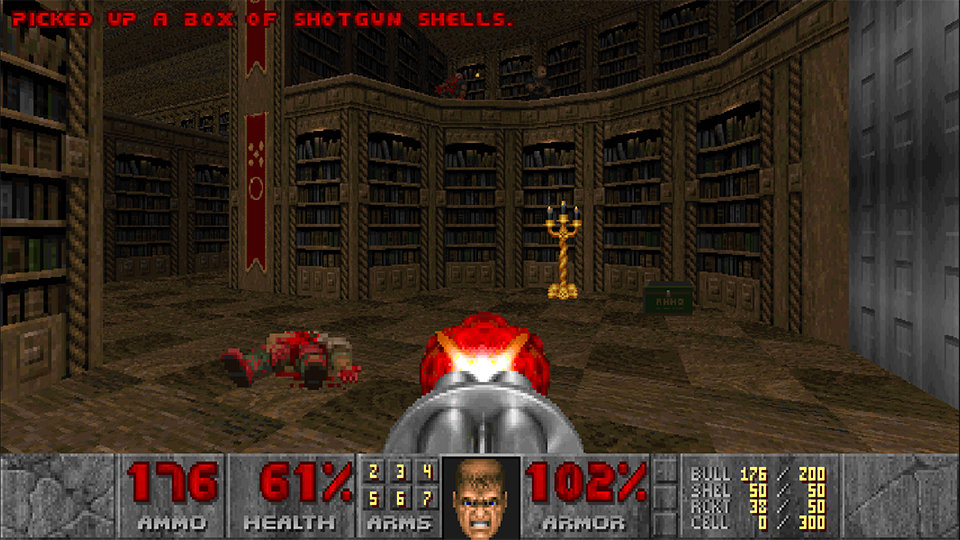 SC: What were the biggest challenges/hurdles you had in making DOOM Zero?

GC: I needed something to make this game stand out, which is why I not only chose to add new mechanics in the game but also have them work in the DOS version. But that meant I had to deal with the many quirks and bugs that came with that version.

The visplane limit was my biggest hurdle. I don't think I would've succeeded getting it to work if it weren't for the Node Viewer and Visplane Explorer add-on for Doom Builder 2. Ironically, some source ports would encounter new problems that the DOS version didn't suffer from. PRBoom+ has sector bugs when near a sky, and Chocolate Doom just straight up crashed in 1 particular map.

SC: How did you come up with such interesting mechanics never used in the original game that still fall in line with vanilla gameplay?

GC: First, I build a very simple map, usually a big square room where I have space to construct some testing structures. And then I mess around with them with all the different tools and mechanics to see what is possible in an unmodified version of DOOM. Only after that step would I then decide on the structure and layout of the map designed around the puzzles I’ve chosen to use. 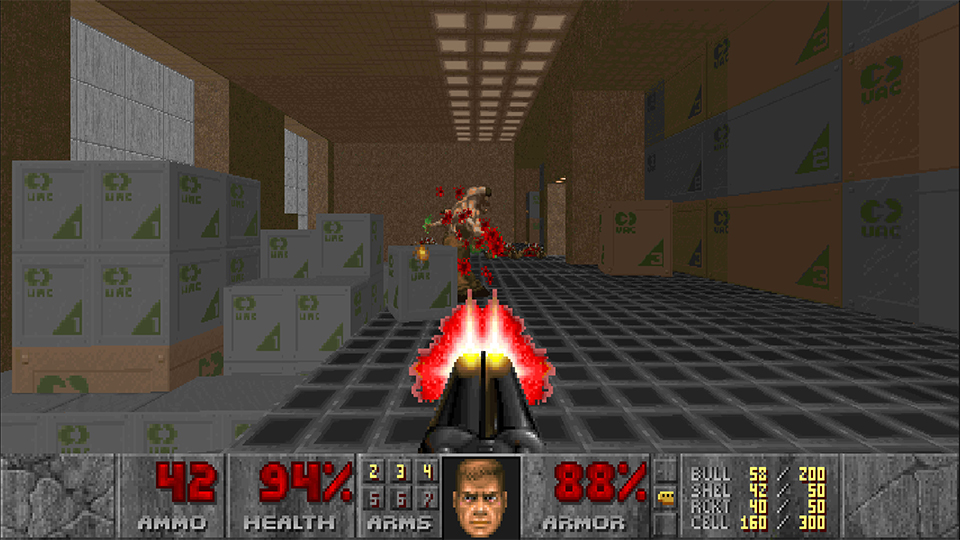 SC: What is your individual approach to level design? And tell us about how and why you went about creating the unique branching paths found in DOOM Zero…

GC: I always try to introduce new puzzles or a new combination of them in each individual map, and when I present them to the players for the first time, it's always in an easier and safer environment before giving them a more challenging version of the same puzzle in a later level.

An example of this would be the running puzzle over a toxic floor in Map10 where the player only needs to run in a straight line, but later the same puzzle is seen in Map20 but with the platforms slightly elevated with every step, making it a requirement to keep your speed up whilst also turning at the same time without falling into the toxic pit.

In the case with the branching paths, they never really prevent the player from exploring the entire map. That way no matter what choice you make you can always get a 100% completion rating whether it is through backtracking or through finding a secret. The branching paths only change the direction or the order in which the player visits an area. That way I can have branching paths without me being required to build an entirely new area that is only accessible to just one specific path, though Map 14 is the exception.

GC: "Void" by Cyb and coincidently the similarly named "Void and Rainbow" by Serious_MOod. Both are creative, original, visually striking and have more to offer than what one would expect from your typical DOOM mod. 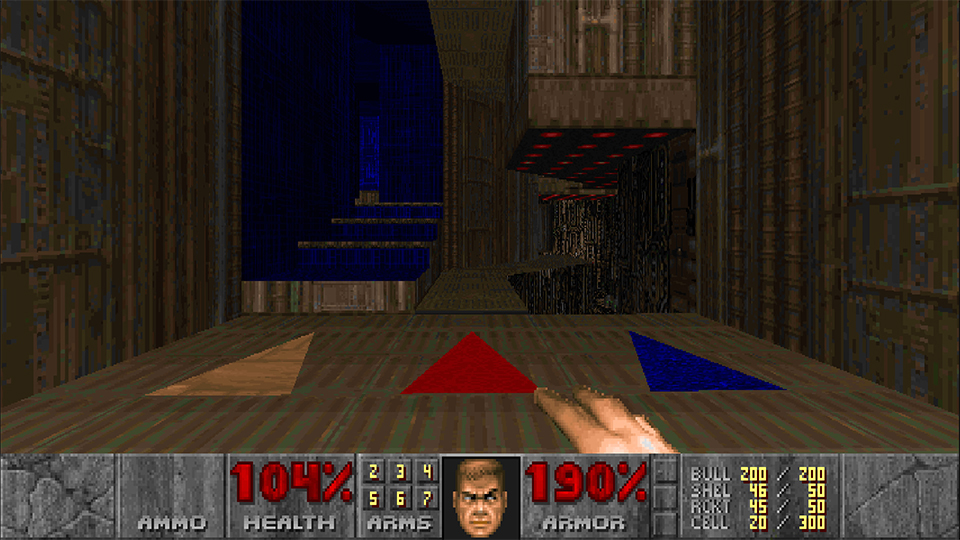 GC: If you want access to my other mods and updates to Falconet, our new game that is currently in development, then head over to Irukasoftware.com and support us!