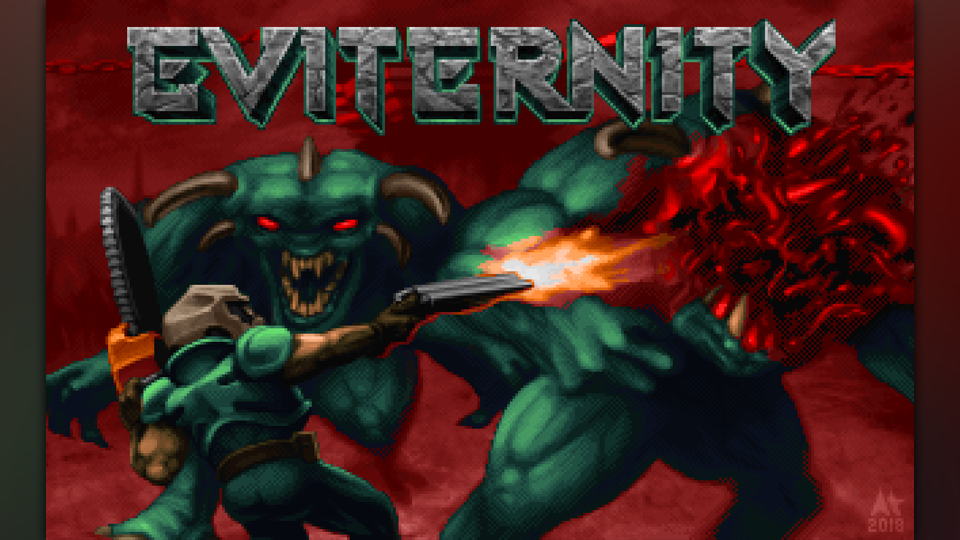 Let’s talk about plans. To create a level in DOOM, you need lots of them. From placing vertices and linedefs to lining up textures, setting up triggers and placing spawn points, you must have a very precise plan for the order of things. When it comes to designing single player experiences, timing is everything.

What if you found out that a fellow modder was nearing completion of an incredible texture pack which was ten fragging years in the making that would be releasing right around the time of DOOM’s 25th anniversary? Would you and a handful of other well-known community mappers be able to get a 32 level Megawad together (with two levels being secret, just like in DOOM II) in ten months’ time to be able to release the precise day of the anniversary?

Well there’s one man who said, "yes" to every crazy idea listed above, and his name is Joshua O’Sullivan, better known in the community as Dragonfly. On December 10th, 2018 Dragonfly and his super group of well-known mappers dropped a massive megawad to coincide with the incredible OTEX texture pack by fellow modder Ola Björling (Ukiro) entitled, "Eviternity". This whopping 32 levels' worth of a birthday present was divided into six episodes with six unique themes that perfectly complement OTEX’s incredible depth and beauty:

In case you zoned out and just started reading from this sentence, the prolific modder we’ll be focusing on for this month’s spotlight is: Dragonfly

What do you need to play this WAD? GZDoom TIP: Also works in: PrBoom+, Eternity & Doom Retro; and is supported in Zandronum when playing multiplayer. 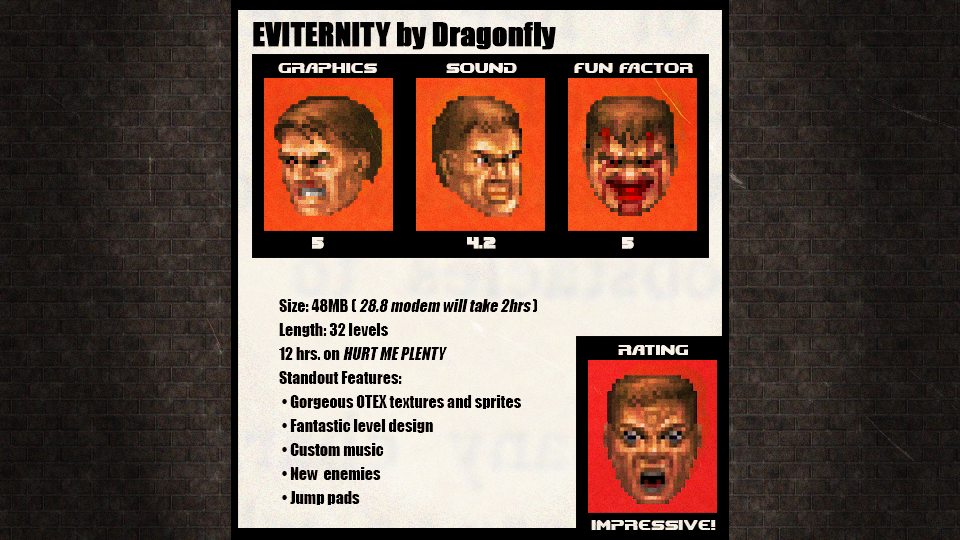 Standout Features: Every texture is beautiful, new and incredibly detailed. From new skyboxes and a tranquil water texture (including waterfalls) to the all-time prettiest looking tree sprites I’ve ever seen in-engine, Eviternity is brimming with new fully fleshed out distinctly different settings. The levels double and triple back on themselves in such clever ways and perfectly reward exploration. As if the beautifully crafted levels weren’t enough, how about some new and incredibly challenging enemies?

Aesthetics: From every angle, these levels are as pretty as a picture. So much care has been taken to craft such richly unique settings and map layouts. When you learn that Dragonfly's approach to level design is to just start building without any blockouts or preplanning stage, you'll be scratching your head and wondering what kind of Beautiful Mind scene is playing out in his brain. But one thing he does start with central to every map he builds is theme. So, it's no wonder that his levels have such strong identity and innately organic pathing. 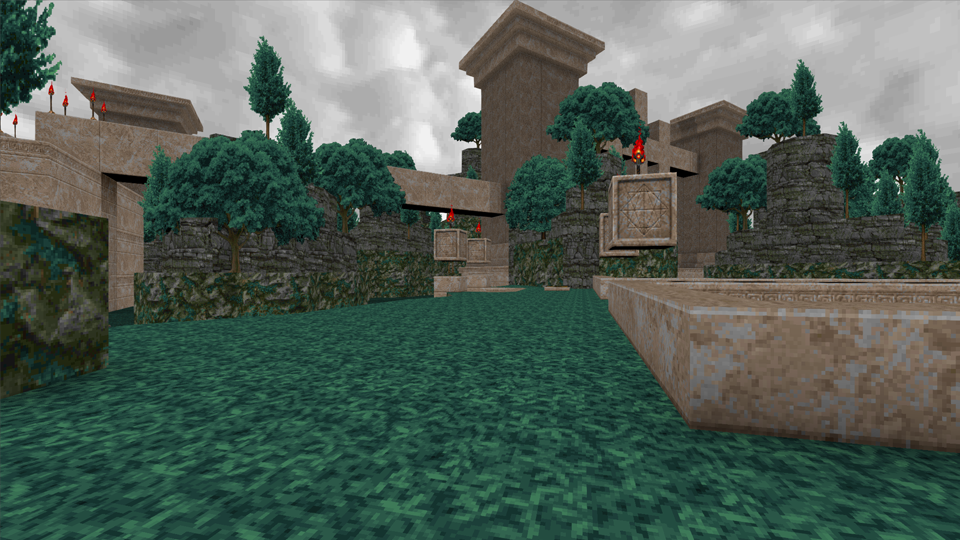 Bask in the majesty of those dang trees! Props to Ukiro. 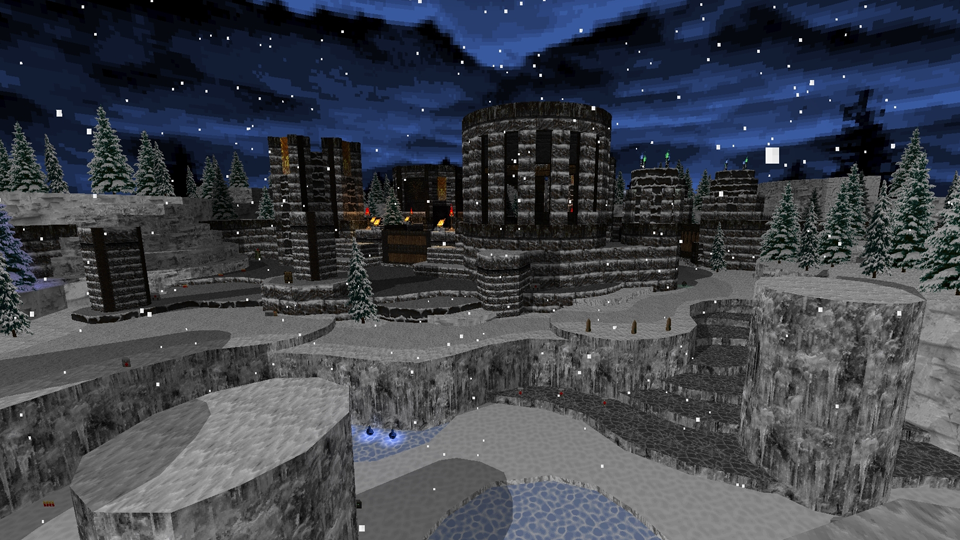 Care for some in-engine air conditioning? 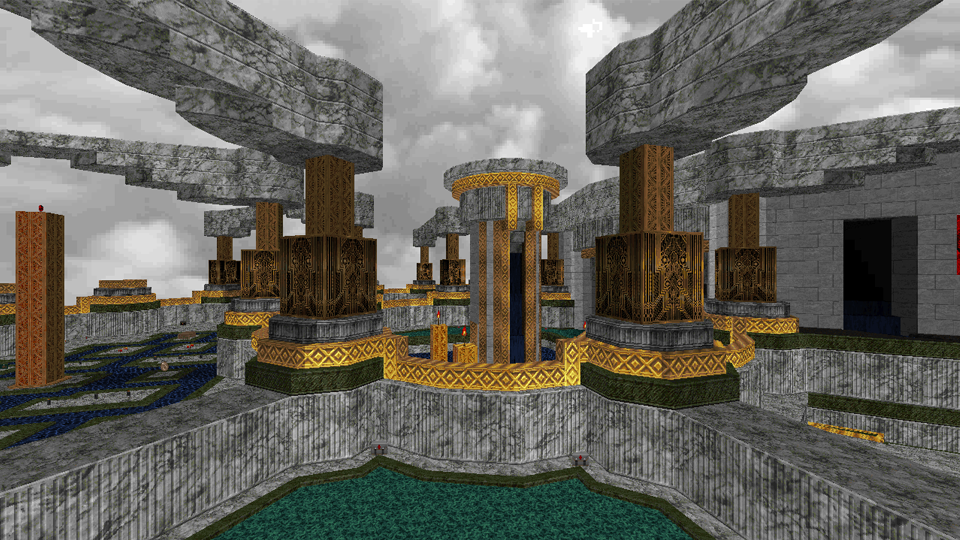 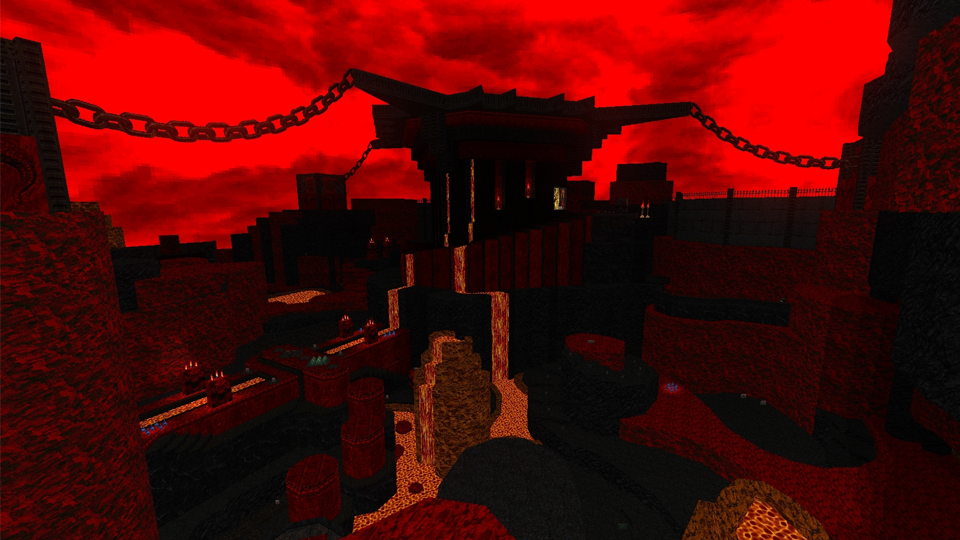 ...and go to HECKING HECK while you're at it!

New Enemies: There are quite a few in this megawad, and I really like how slowly they're peppered into the fold of tried and true DOOM II enemies. Two new demons I wanted to highlight, as you'll be running across these foes most often, are the teal OP Pinky on uppers, the Nightmare Demon (as seen in the title screen) and the ashen, not-to-be-taken lightly Astral Cacodemon.

I really appreciate how the Nightmare Demons and their quickly repeating sample when alerted forces you to wake up from your comfortable dream of endlessly lining up a single Super Shotgun blast to put any Pinky-type demon down. Instead, you start panicking over if you have enough space around you to plus-back as you'll need some runway to land enough consecutive shots to take a single Nightmare demon down, let alone a pack of them.

Speaking of plus-back movement, you'll need to 100% employ this strategy (and your best dodging skills) when waking up the terrifying Astral Cacodemon as their burst fire is insanely fast and unpredictable. As far as threat level think Archvile but flying. RUN AWAY!!!

Twice as tanky. Twice as hungry.

The rushdown damage is no joke. Treat with care.

Custom Music: With such a short runway to meet the anniversary of DOOM, Dragonfly didn't just settle for default music to fit all the incredible levels he and his friends made. He took it upon himself to hit up his group of talented midi makers to adorn his wildly different settings with some amazing music. Twelve completely new jams and twenty existing tracks are yet another aspect that make your playthrough that much more unique and enjoyable.

What do you mean a faster pistol? I know it sounds crazy, but what if I told you that the only thing making the original pistol from DOOM less than ideal in most situations was just its fire rate? 'Cause with a simple tweak of upping dat fire rate, I found myself even switching to it with a full arsenal at times. Who knew?! (Dragonfly did)

It's 2019 After All... For the first time in a Nods To Mods, our level lord Dragonfly streamed most all of the creation of this megawad! I love that we live in a time where not only can you easily reach out to other creators in the community to do collaborations, but you can also involve speedrunners and players of all skill levels through streaming, and interacting with anyone interested in the process of making something special like this. Next step: light bikes and hover boards.

What are you waiting for? GO PLAY EVITERNITY.WAD

It takes a village to make a MEGAWAD, so be sure to check out the credits here.

We wanna know what you guys think! How much did you love it? How long did it take you to complete? Would you say the measure of time it took lasted an EVITERNITY??? How many times did you stop dead in your tracks as a direct result of being enraptured by trees? What else were you in awe of? What was your favorite level? Favorite new enemy? Does your dad work for SEGA? Is he a jet pilot? TELL US EVERYTHING EVITERNITY.WAD RELATED IN THIS EVITERNITY COMMENT THREAD!

Stay tuned for upcoming interview article(s) where we have a nice virtual sit down with Dragonfly and gain the insight of the cosmos!