We’re proud to bring yet another action-packed Add-On to our re-releases of DOOM II! Players can now download and play BTSX, Episode 1 through the main menu and enjoy 27 maps’ worth of demon-slaying thrills. We’ll have details to announce later, but this first Episode the last time you’ll see BTSX in our series of Add-Ons, either – wink!

The lead on the BTSX project, Sarah “esselfortium” is an accomplished modder, self-proclaimed 300-year-old and composer on indie games and visual novels such as Heart of the Woods and the upcoming Summer at the Edge of the Universe. We were lucky enough to interview Mancuso for an inside look at the creative process behind this impressive BTSX series!

SLAYERS CLUB: What was your experience getting into DOOM modding? How long have you been making DOOM levels?

SARAH MANCUSO: I was the kind of nerdy kid who spent more time trying to make games or modify existing ones instead of actually using them as intended. If I could dig into the resources to change the graphics or menus in something, I was all over that.

DOOM seemed like you could just make anything imaginable in it, even before the source code was released. I got interested in DOOM mapping in the late ‘90s, spent a few years being very bad at it and started learning more and getting more seriously involved in the community around 2005 or so.

SC: How big was your team to make BTSX, Episode 1?

SM: Other than myself, BTSX E1 has contributions from 14 other level designers, five other composers, and one other artist, plus a number of playtesters. Things snowballed from very modest initial plans into an incredible team effort. 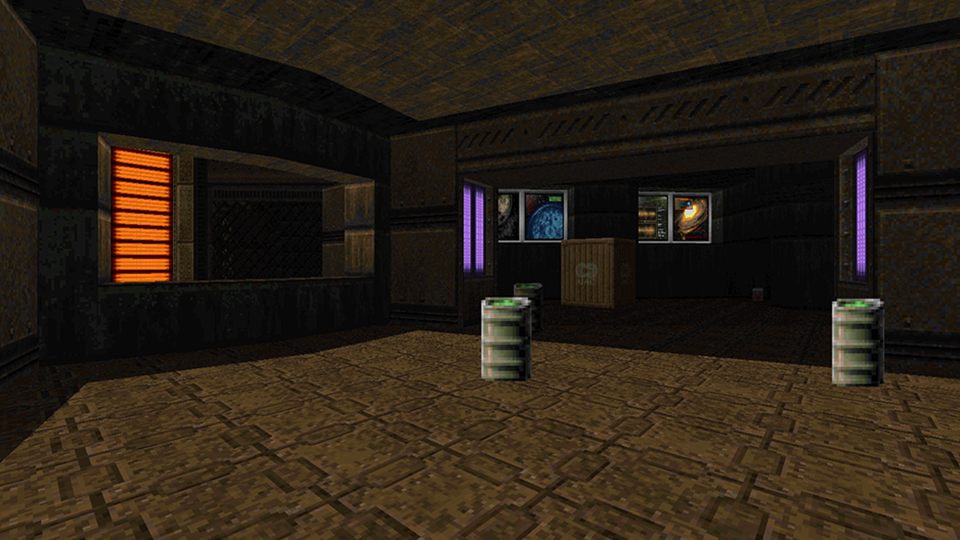 SM: Doom Builder 2 and its descendants were the main tools used for level editing, along with SLADE for resource management. I used Photoshop for the textures and Ptoing used ProMotion for his great pixel artwork on the logo, status bar and other elements. Jimmy used Cakewalk for his parts of the soundtrack and I used Reason and Sekaiju for mine.

SC: What was your main inspiration for the BTSX series?

SM: The original spark of inspiration for BTSX was The Darkening E2, an older vanilla-compatible DOOM mapset with original textures inspired by Quake 2. DOOM 64 was also an early influence.

It grew from there and turned into a place where I could try out all sorts of ideas and influences, especially once I was talked into expanding from the initial techbase direction into the more gothic/demonic themes that E2 focuses on.

I stare sadly at Doom Builder for a year and then a vertex moves.

Outside of speedmapping projects like the 32in24 series, I tend to work pretty methodically. My attempts at speedmapping without outside pressure have a tendency to turn into long-term projects.

There is one big exception to that in BTSX E1. The sandbox city level, MAP19, began as a 3-hour speedmap I had recently done that Tarnsman and I decided to turn into a BTSX level literally one day before we released a major update to E1. Tarnsman detailed it, fleshed out the original layout further, and handled the thing placement while I was simultaneously making the city textures and sending them to him as they were made. Sometimes a spontaneous “sure, why not?” idea like that can be just what’s needed to inject something fresh into a project. 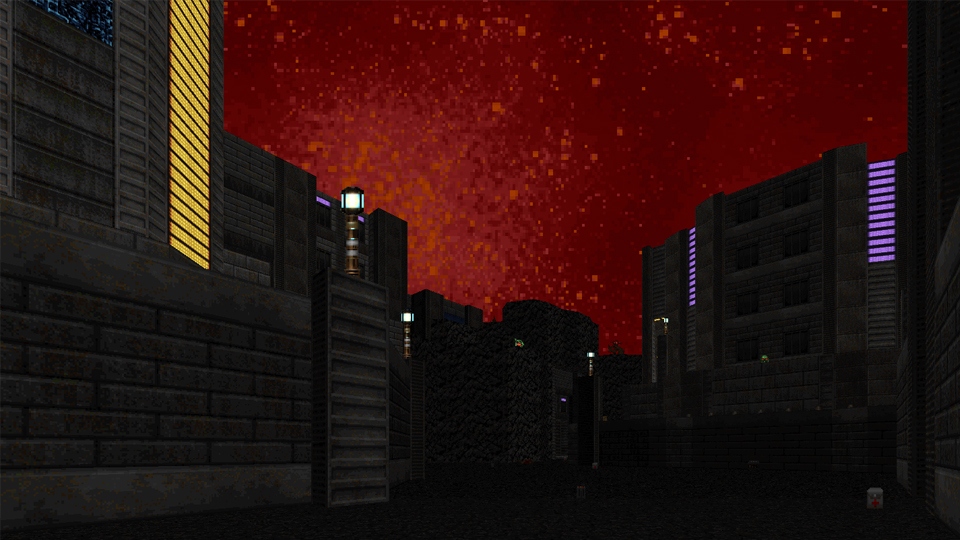 In terms of design priorities, layout flow and conveyance are among the things I focus on most in maps; it can be an interesting puzzle to figure out how to take some obscure progression and make it feel logical to the player. I also really love dynamic structures – when an entire room lowers or otherwise reshapes itself to reveal something new, it always leaves a strong impression on me. Big moving parts are something you’ll be seeing more of from me in BTSX E3.

I’d also say that working on projects like “Doom 2 The Way id Did” informed my current mapping style a lot, especially Sandy’s experimental setpiece tendencies and Romero’s fondness for open spaces and precarious ledges over damagefloor. MAP17 was completely redesigned midway through BTSX E1’s development, partially inspired by what we had been doing for D2TWID and it changed from a noodly corridor-fest into a sequence of cool setpiece areas with moving parts. Outside of BTSX, my Ancient Aliens map “Acerola-Orion” pulled a lot from that Romero school of design.

SC: What was/were the biggest challenge(s)/hurdle(s) you had in making BTSX?

SM: Managing what became such a huge project was tough. Other team members were a huge help in keeping things organized and avoiding letting things slip through the cracks, but there were still troubles. There are so many details that can go wrong when releasing even a smaller project, with something the size of BTSX it’s basically impossible to avoid some Situations. On the day of the first public release, I made a last-minute tweak to MAP22 that accidentally made it impossible to exit until we put out a hotfix a couple hours later.

Keeping everything compatible with vanilla DOOM2.EXE also brought some challenges. DOOM 2 originally had a very punishing set of limitations on how much geometry can be onscreen at a time. When I started BTSX, I masochistically decided that it would be a cool challenge to make it fit within those restrictions, and to try doing it without the end result feeling noticeably limited. A few levels across E1 and E2 ended up getting reworked pretty substantially to squeeze them into vanilla limits. 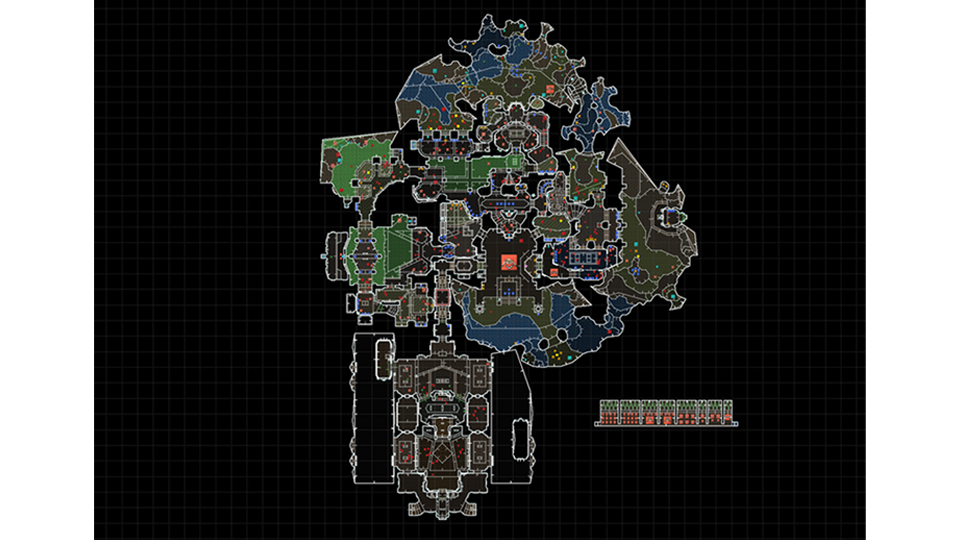 Midway through development we ran into what I think was a previously-unknown DOOM bug, where internal betas of BTSX were hard-crashing DOS due to the amount of data we had in one WAD file, so we had to split the resources into two files for the vanilla release.

There were also some more directly self-inflicted challenges, like the time I decided I wasn’t satisfied with the ending of E1 MAP17 where you returned to the start area, so I made a ton of custom-fitted single-use textures in order to have you return to a transformed, exploded version of the area. Not quite RAGE-style megatexturing but a similar idea. That was another “sure, why not?” idea like MAP19, though this one turned into “oh, this is actually really difficult and time consuming, why did I do this??” I’m happy with how it came out, but I doubt I’ll be doing it again, haha. 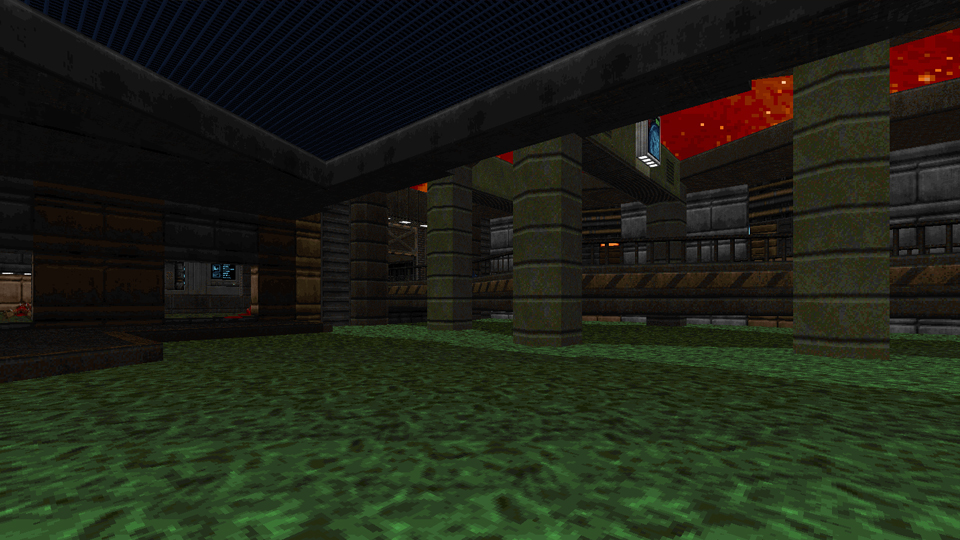 SC: How long did it take you to complete Episode 1? Was it a quicker turn around for Episode 2?

The long answer: Episode 1 started back in 2009 with far less ambitious plans. The project was effectively shelved for a while due to other projects taking focus, and was picked back up in 2011, which is when most of the team was invited. 2011 and 2012 were the busiest years for BTSX development, when momentum snowballed due to all the newly-invited mappers inspiring each other, and most of E1 and E2’s levels were made in that time. A few levels date back to 2009, including “Vesta Station” and “The Annex” and some others, but they changed a lot between then and their finished release. 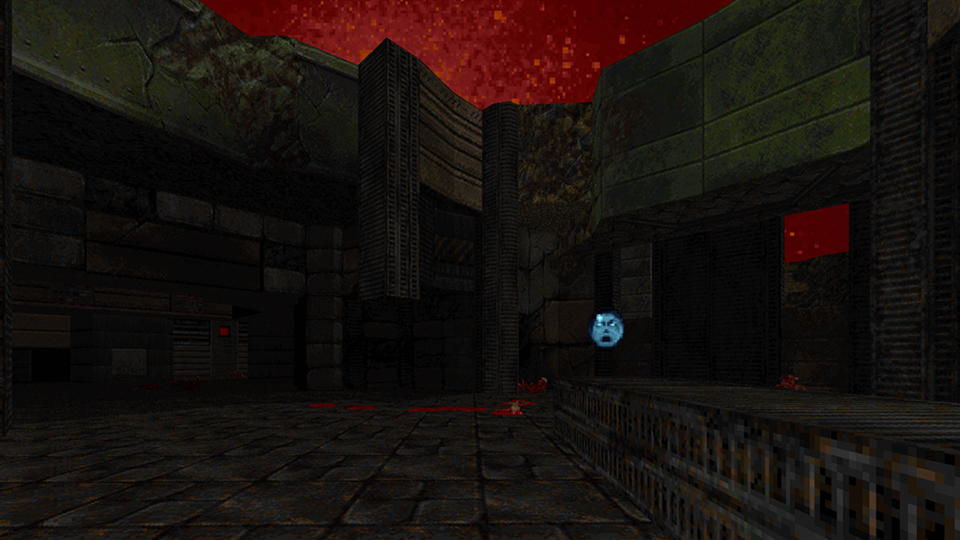 Amusingly, at one point I was actually planning to release all three episodes a month apart from each other! I had vastly underestimated the workload and the level of burnout we’d be feeling after each release.

The terrifying answer: I recently found a YouTube comment on an E1 playthrough where someone said “I played this map in co-op with my dad long ago, this is going to be nostalgic”.

SC: Tell us about where this ambitious series is heading in Episode 3, and why you’ve chose to span this epic series across a trilogy.

In Episode 3, DOOMguy finds a broken time machine and ends up in the gaps between dimensions. It’s got void maps, dreary dreamworlds, forest villages, corrupted tech, sideways cities, Arabian temples and more. Why are there three Episodes, though? People just made too many maps, we got too excited seeing each other make stuff and couldn’t stop. :) 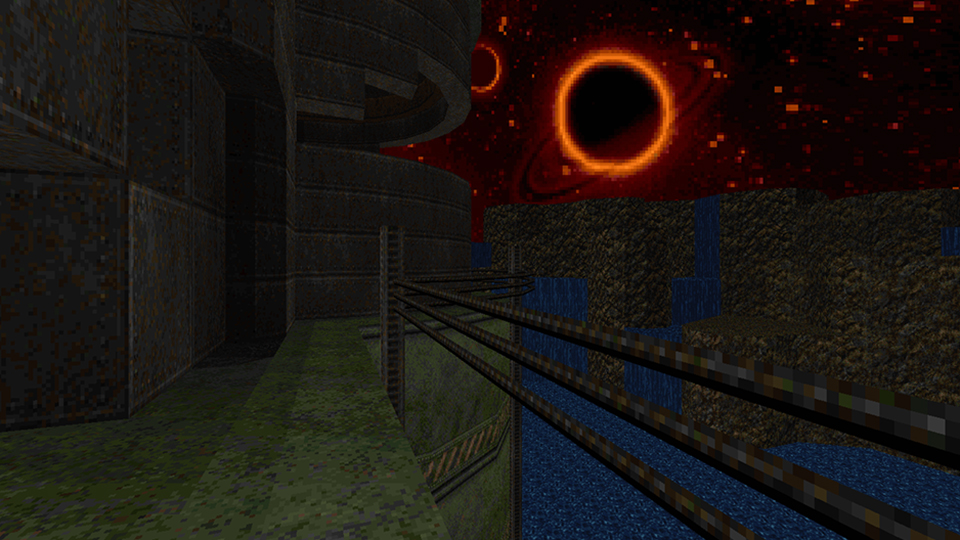 We debated about whether to split it into multiple releases or drastically cut maps from the lineup to fit it into one megawad, and we ended up choosing to rearrange things into three themed Episodes.

My all-time favorite DOOM modder is the late Esa “Espi” Repo, creator of the mapset “Suspended In Dusk” and the Eternal Doom IV level “The Shrine”, among other things. He was a mapper with an unparalleled command of sense-of-place, and a great artist and friend as well.

This is possibly self-serving to say, but the team that helped make BTSX is just incredible. I feel really lucky to have been able to work with them all on it. Someone who deserves special mention is Boris “dew” Klimes, our lead playtester who was responsible for proposing countless gameplay revisions and enhancements across nearly every map. 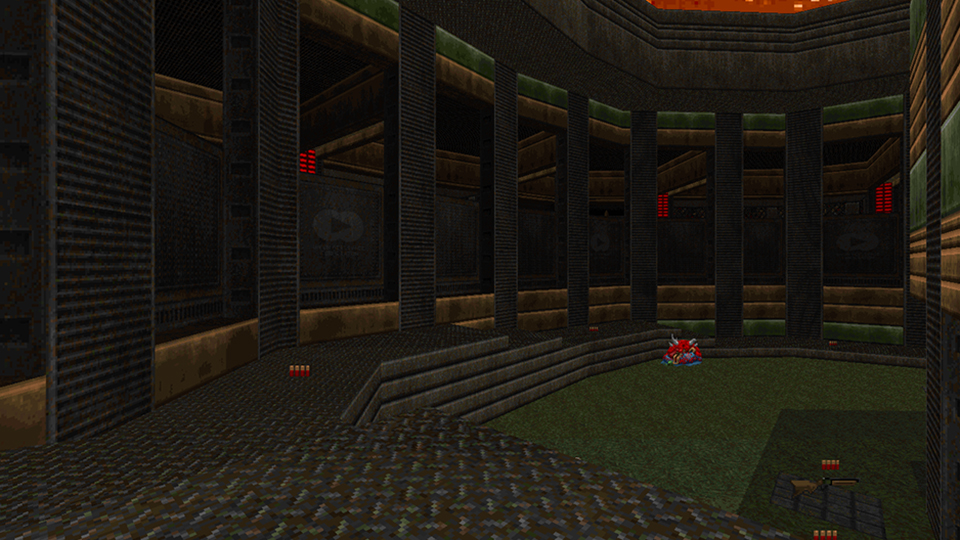 SC: Wanna give any other shoutouts?

Sponge and Kevin from id deserve a huge thanks for making this official Add-On release of BTSX happen and helping navigate all the surprise roadblocks to putting out such a big community project that was never planned for this sort of commercial release. Everyone on Doomworld for keeping the Doom community alive long enough to have a comeback like this. Black lives matter and trans rights are human rights.

A huge thanks to Sarah Mancuso for chatting with us! Be sure to check out BTSX Episode 1’ for yourself in the official Add-Ons menu in our re-release of DOOM II and check back into Slayers Club for more DOOM content!