Welcome back to another Quake edition of Nods to Mods, where we sit down with community creators to get a closer look at their process! We’re so excited to be featuring one of the earliest breakout Add-ons yet. Originally released in 1997, Beyond Belief is now available as a free eight-level Add-on for the re-release of Quake.

SLAYERS CLUB: Join us in a warm welcome to Nods to Mods newcomer, but certainly not a newcomer to the scene: Matthias Worch!:

MATTIAS WORCH: Hi! I’m Matthias Worch, known as “Langsuyar” in the DOOM and Quake Mod scene back in the days. I grew up in Germany and moved to America 25 years ago because of Beyond Belief. I’ve worked on a bunch of interesting projects since then like Dead Space 2, Star Wars 1313, Mafia 3, The Mandalorian (Virtual Production Tech) and The Matrix Awakens: An Unreal Engine 5 Experience. These days I live in the San Francisco Bay Area with my wife and kids. 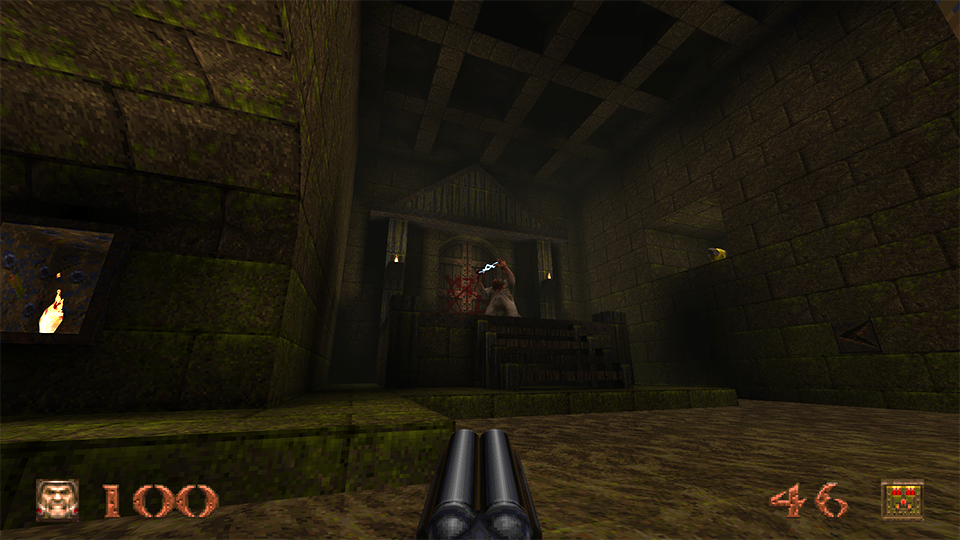 SLAYERS CLUB: How did your level-making journey begin?

MW: Before I get into DOOM mapping, I’d already made small Commodore 64 games in BASIC and 6502 assembly and done early 3D level design on the Amiga in a program called 3D Construction Kit. I got started with DOOM level design when I got my first modem and downloaded a DOOM II level editor (WadEd) from a FIDONet mailbox. I released a nine-level episode for DOOM II that was well received called “The Troopers’ Playground”, which led to contributions to a couple of well-known megaWADS like Memento Mori 2 and Requiem.

I was hanging out in the IRC #level_design channel a lot while doing that, and we were all keeping track of Quake and talking about the mods we might create for that game. When Quake came out, the big mods were slow to come. DOOM levels could be created in mature and full-featured 2D editors, while Quake was 3D and the tools were just coming online. Everybody was trying to make levels at the same time that the editors were being developed and while this was an exciting time, it also required a lot of grit and tenacity. A fast computer didn’t hurt, either! Quake levels took way longer to compile than DOOM levels ever did. 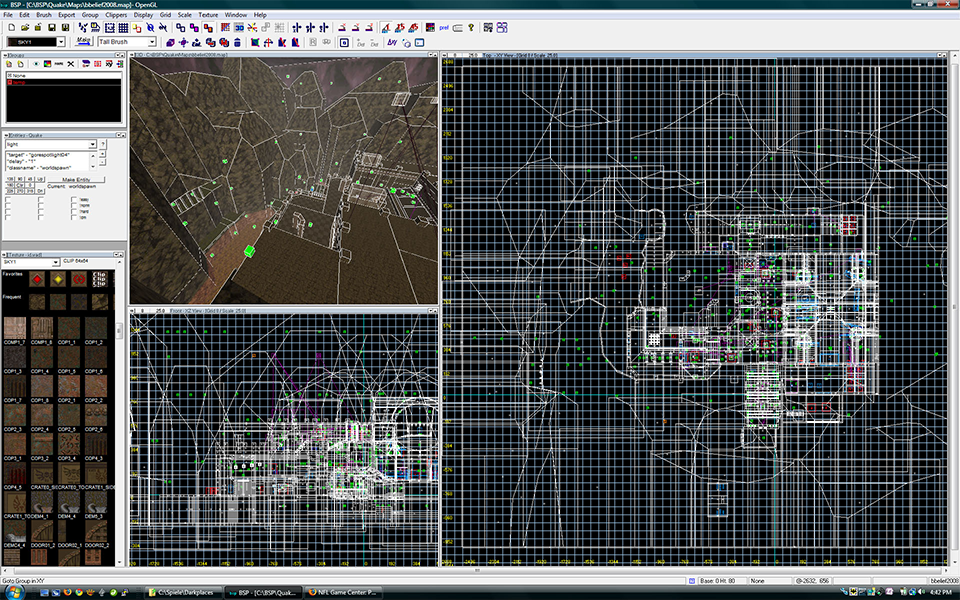 SLAYERS CLUB: We’re so excited to finally feature one of the first community-made full episode Add-ons seen for Quake, originally released all the way back in 1997! Can you tell us a bit about what the Quake modding scene was like in the early days?

MW: In my sphere, the DOOM modding scene seemingly became the Quake modding scene: pretty much everybody I knew was switching to Quake. We were hanging out on IRC reading Blue’s News, Stomped and Scary’s Quakeholio to stay up-to-date on what was happening and discovering a whole new world of Internet multiplayer with QuakeWorld.

I remember a lot of grand plans and big announcements for Quake total conversions around that time; IRC was full of chatter about all the great things people were going to do with Quake. But Quake upped the ante on LD complexity and the manpower that was required, and the tools were only slowly coming online so that momentum took a while to build. The first inspirational creations that I remember were individual single-player levels (well, that and CTF), memorable TCs like Zerstörer came later.

Ultimately, I just had to put my head down and do the work. I was working on my levels every night between deathmatch sessions, with the #level_design and #ocrana (my Quake clan at the time) IRC channels running in the background. I don’t know if I was particularly social back then or part of “the community,” I was just doing my thing while chatting with like-minded folks. 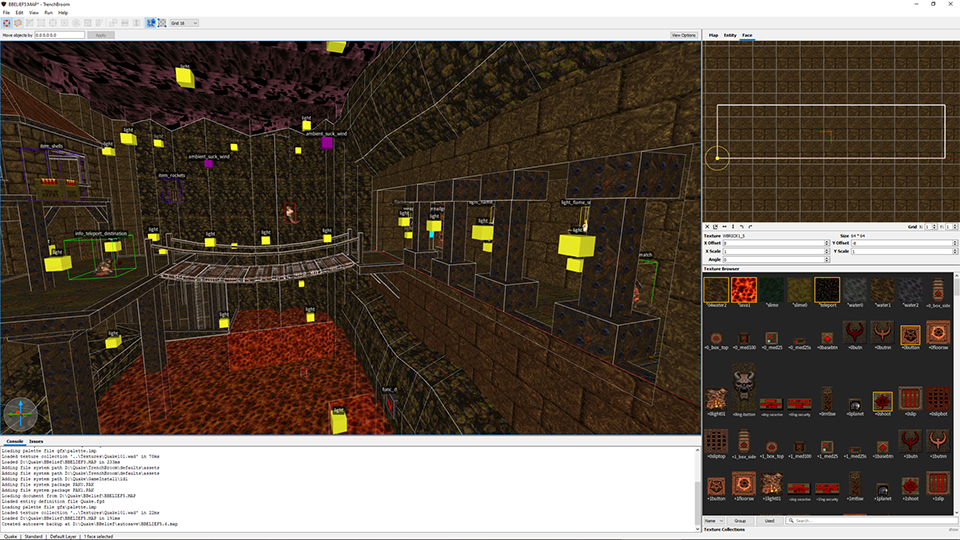 SLAYERS CLUB: What was your main inspiration for this new episode Add-on?

MW: I think I just wanted to make a good single-player episode for Quake. A lot of the energy back then was going towards TCs – Total This and Total That, often never released; not many projects wanted to build on top of Quake itself.

I’ve always been drawn to creating single-player content, and challenging myself to create levels that were as good as the official Quake levels was a big motivation. Once I realized that I might actually have a professional career in game development, I was also drawn to creating a great “calling card,” but that realization didn’t strike me until I was way into development already.

SLAYERS CLUB: What is your individual approach to level design?

MW: Back then, I was just making levels that I would have liked to play. The levels I wanted to play had a good mix of exploration, engaging combat and a sense of wonder. I was probing Quake a lot, I think, figuring out how to get good gameplay out of its mechanics, and I tried to ensure that every room and encounter existed for a reason. I don’t think there is any wasted or filler content in these levels.

Pacing was important to me, I spent effort on ramping up the monster and weapon progression well to keep players engaged. Upending a convention or two (i.e. giving away the Lightning Gun early, but being sparse on the ammo, or surfacing new ways to deal with zombies, as seen in BBelief2008) kept players interested, as well, I think.

Beyond Belief is some of my earliest work, so I was just feeling things out. Since then I’ve codified a bunch of my experience and philosophies into a series of GDC talks. 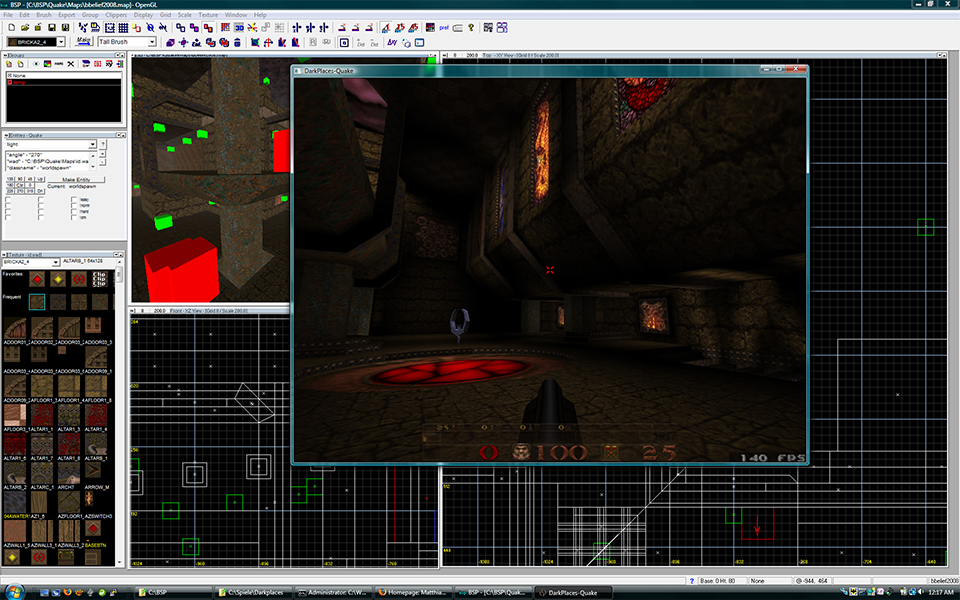 SLAYERS CLUB: Beyond Belief has been long praised for the ‘difficult but fair’ challenge it presents players. With great monster and weapon placement throughout and ending with a sweaty boss fight, the result is a super smooth difficulty curve that made a lot of community players lifetime fans of your work. Tell us a little bit about how you managed to accomplish this, less than a year after the initial release of Quake?

MW: A lot of it was just me feeling things out. I played the original levels a lot and I played my levels a ton, always refining and polishing and making sure that I was still having fun after the ‘nth time. I figured that if I, a giant Quake fan, was having fun playing these levels, others would as well. I think the reputation for being “difficult but fair” came from me keeping myself entertained; if you play and polish a set of levels over and over again, you dial in the difficulty to that degree.

SLAYERS CLUB: Back in 1997, the tools available must have been much less sophisticated compared to what’s readily available now. How on Earth did you make this eight-level Add-on and what tools did you use?

MW: As mentioned before: grit and tenacity. I used Quest to make all of my levels back then; it had a user interface that I really liked but only had wireframe viewports. The initial versions didn’t have texture alignment tools yet, so I text-edited the .map files to dial in texture offsets. Without clipping tools, every structure in the original release was made out of cubes, i.e. an eight-sided pillar is three stacked cubes with the edges tucked in on the outsides.

Compilation times were one of the bigger challenges; because a full BSP, light and vis pass of a level took several hours, I didn’t do those a lot. I usually compiled a quick version of the level to test (it was usually leaky or had no fast lighting or vis). I played the level, made lots of notes and then batched as many changes as possible into the next version. To speed things up even more, I’d often copy a section of the level into a separate map file (Quake .map files are human-readable text files, so this was possible), and then copied the finished sections back into the main map when I was done.

I compiled full versions of the level overnight while sleeping. Towards the end, an Ocrana clan mate (Sputnik) also helped me by providing remote access to one of the computers at his business; I could upload a level via FTP, trigger a compile and download the finished level later. That kept my own computer operational, which was a big deal at a time when everything was single-threaded. 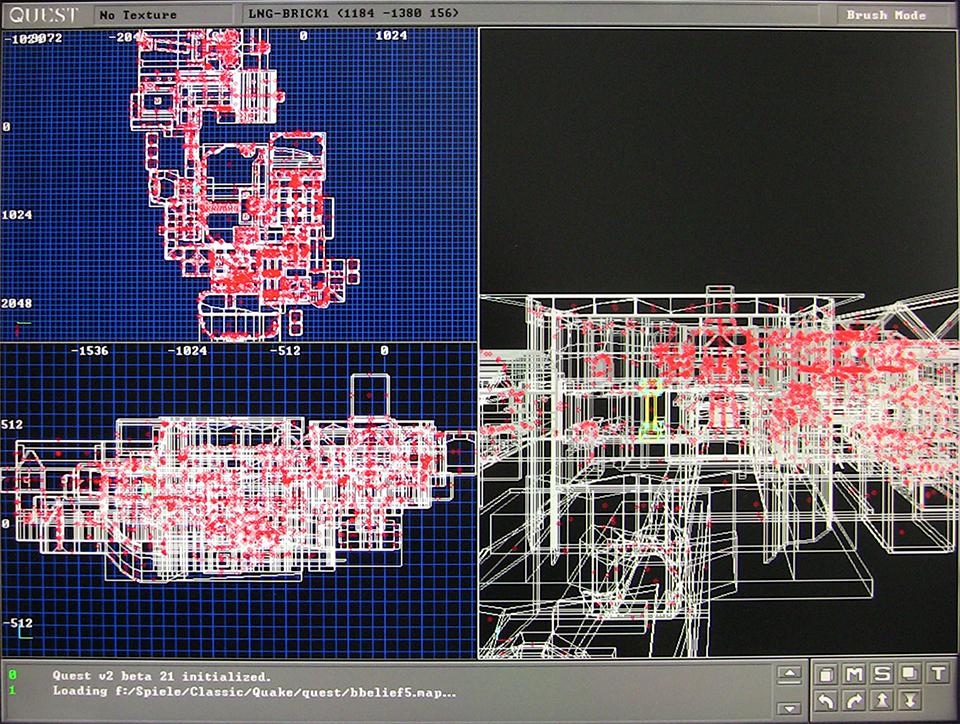 *SLAYERS CLUB: What tools are your favorites to use for Quake modding nowadays?

MW: For BBelief2008, I had used an updated version of BSP. For the remaster I went with TrenchBroom, which looks like the current standard for a reason: it is a lot of fun to use. For all other tools I went with the old versions that I still had in my archives: TexMex and PakExplorer still work!

SLAYERS CLUB: How long did it take you two to complete this eight-level Add-on?

MW: It took around seven months, November ‘96 to May ‘97. The remaster took several weeks, on and off between work, life and family. 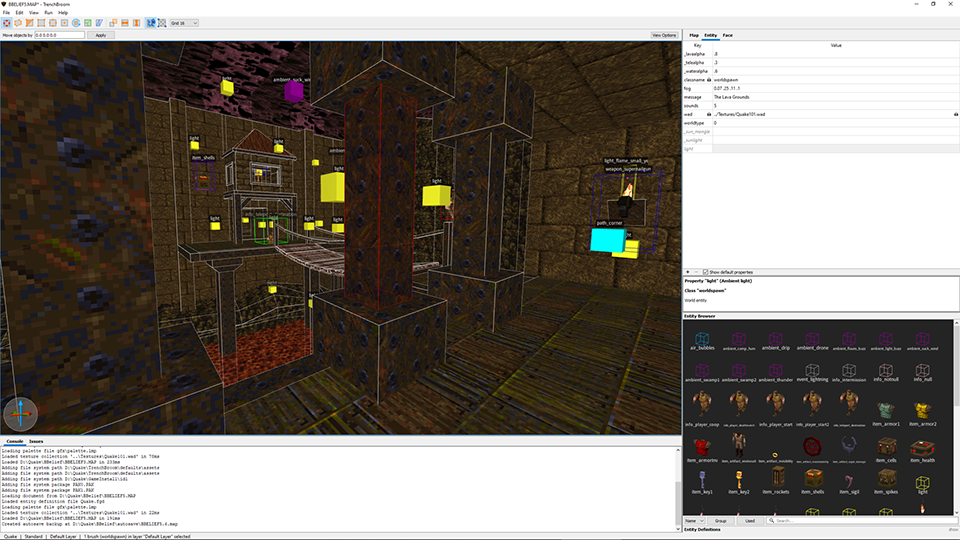 MW: Matt Sefton and Andrew Smith’s levels inspired me back then; they were making the kind of single-player experiences that I wanted to play. (Matt also had a great review page for single-player maps, SPQ Single Player Heaven.) Iikka Keränen made beautiful maps. Zerstörer was awesome both in atmosphere and level design, the kind of conversion that made perfect sense within Quake and the kind of mod I might have made if I hadn’t been a single person outfit.

More recently, I’ve been catching up on the official releases. I played Machine Games’ Dimensions of The Past on my Steam Deck on a recent return flight from Europe and had a blast.

SLAYERS CLUB: What have you enjoyed most in the re-release of Quake on modern platforms?

MW: Quake has a special place in computer gaming history (and in my heart); seeing it so readily available on modern platforms is great. I’ve been having a lot of fun catching up on the single-player mod releases and I usually play them my Steam Deck. Portable Quake provides a nostalgia kick that is hard to beat! I’m also looking forward to seeing my 12-year old son play Beyond Belief that way now that the Add-on is officially released. 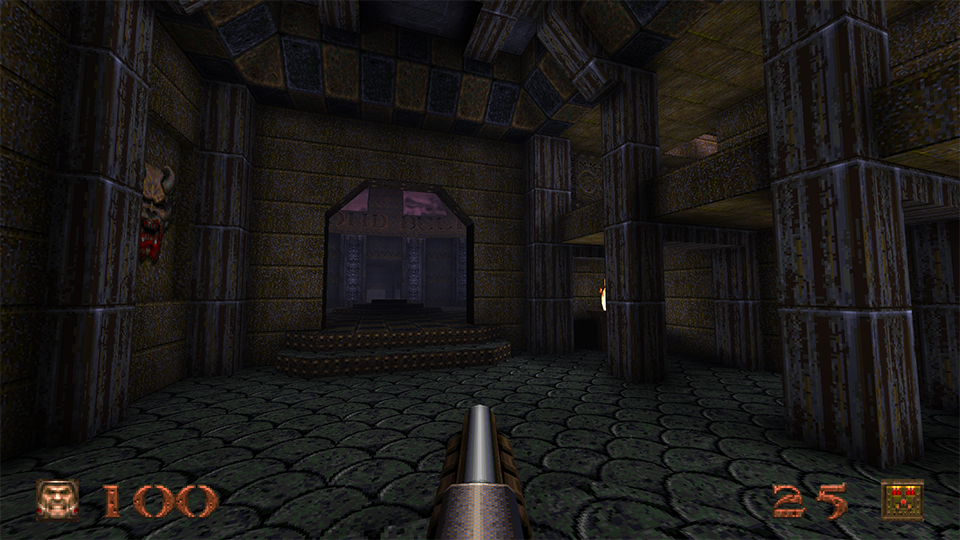 SLAYERS CLUB: Wanna give any other shoutouts? No time like the present…

MW: I’d like to extend special thanks to my co-conspirators:

Denis Möller, whose unfinished map BBelief2 is based on. Andi Fink (same for BBelief3). Negke, who pushed BBelief2008 out of the door when I was dragging my feet. Dave Weiden’s mod made the original boss fight so memorable; unfortunately we weren’t able to contact him for this re-release and I recreated the Chthon logic for this re-release.

Mike Rubits at id was always around to help with the re-release. Ericw provided invaluable tool support when it turned out that a bug in modern QBSP versions made the Beyond Belief source maps compile incorrectly. The entire Quake Mapping community on Discord. Their help was great.

Finally, thanks to my wife and family for giving me time to do this remaster.

For any Add-on hungry Rangers out there who may have missed it – check out our last Nods to Mods interview with Rubicon 2 authors Christian Grawert & John Fitzgibbons also available right now in-game!