Update 4 for DOOM Eternal and DOOM Eternal: The Ancient Gods – Part One is now live and features a free new Master Level and Master Level mode, as well as brand new content for live events like the Gift Wrap and Tear holiday themed event that kicks off on December 10th. Update 4 also includes improvements to max resolution while running in backwards compatibility mode on Xbox Series X and S, some key bug fixes and other improvements. 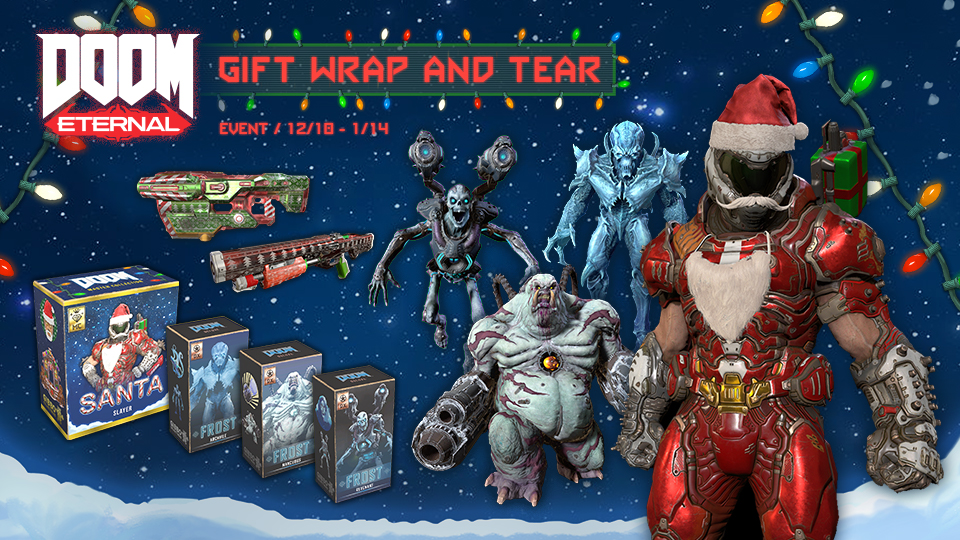 Ho-Ho-Hold Onto Your Butts... Cause Update 4 brings some of the most magnificent merriment seen outside of the deepest depths of the North Pole itself. Feast your frosty eyes on a cornucopia of candy-striped cosmetic collectibles waiting for us all under the virtual in-game tree in our next free Event: Gift Wrap and Tear starting on December 10th. Really glory kills the bah-humbug right outta ya...

If this is your first ever event, Merry Youmas! We recommend you check out this article with a video message straight from from Hugo Claus and Marty Claus about how free in-game Events work!

Updates and Improvements for Xbox

Updates and Improvements for ALL platforms

Main Campaign Fixes for ALL platforms

DOOM Eternal: The Ancient Gods - Part One Fixes for ALL platforms

Resolution: This is a known issue that we are working with our partners on the Xbox team to resolve. Stay tuned for updates.

Workaround: If you have an NVIDIA GPU and are experiencing degraded performance or stability after installing Update 4, we highly recommend you update to the GeForce 457.03 drivers