We’re continuing our coverage to our latest Nods to Mods feature: Eviternity! Read on as Joshua “Dragonfly” O'Sullivan goes in depth on the process that made this incredible 32-level DOOM megawad! Missed the first part of this interview? Check it out here!

DF: A very wide range of tools were used by the spread of people on the team. For the mapping itself, the main tools used are GZDBBF (GZDoomBuilder-BugFix) and SLADE; the majority of the graphics would have been created in Adobe Photoshop, music would have been made in a bunch of tools such as Sekaiju, Reaper, etc.

DF: I've actually written an article on this matter!

I'm one of those mappers who rarely pre-plans anything for the map up front. No layout sketches, no low-detail blockouts of maps. Instead I just build as I go. The first thing I'll typically do in a new map is establish the theme I wish to work around. I'll play around, making a room or small prefab-like assets in this theme to get inspiration for what I'd like to work with.

Once comfy with the ideas set forth in my experiments, I would typically think about what unique elements the theme could bring to the gameplay of the map. For example, in an Egyptian map you could have booby trapped temples, or in a snowy/icy map I could play with the possibility of wind and low friction. Lastly, I'll establish the map's objectives, e.g. find 3 keys to exit, deactivate a forcefield, beat a boss, etc. 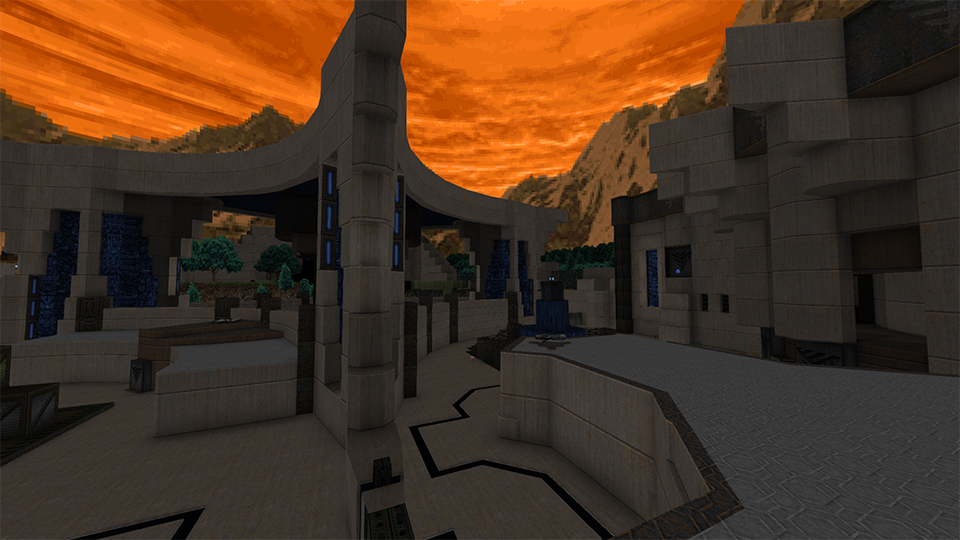 Once I've established my theme and its tropes, I get to work and will often use my experimentation as a base for the map itself and build the map around it. Normally I create whatever comes to mind at the time, and while building it I'll be working out in my head what the next couple of rooms or locations could be, interesting ways to integrate them into the map and how they'd cater towards the overall objective.

I'll always try to keep my mind on the gameplay and the flow of the layout to ensure I build a fun and engaging level which doesn't frustrate the player by being overwhelmingly hard, buggy or easy to get completely lost in.

SC: What was your inspiration behind the enemies, both the new ones and the pre-existing ones you edited?

DF: Good question! The first monster to be made was the Nightmare Demon, which is the teal colored pinky demon. The sprites used for that monster are by "Amuscaria", initially intended for their own project called Hellforged (which was just released, go check it out!). We recolored the demon to make use of the new color palette present in Eviternity. These dudes fill the gap-closer role better than the standard demon and are intended to get the player moving more.

We then implemented two more monsters. First is the Former Captain - a rapid-fire projectile shooting monster taken more-or-less directly from Struggle, with antares031's permission (Antares031 did all of the monster behavior work for us, in fact!). Then we implemented the seemingly iconic "Astral Cacodemon". These scary floating balls of death are designed to be a 'mid-high tier' monster, with its power and health somewhere between monsters like the Revenant and Archvile, but with the ability to fly. Their high movement speed, medium health and downright vicious and unpredictable attack are designed to change the dynamics of any encounter they're in, becoming a high priority target in most situations and promoting the player's focus on good movement once again. Fun fact, the attack this cacodemon variant does was nerfed between the initial release and the final release, as too many people were getting one-shot by it!

We then implemented the Annihilator, a cybernetic replacement for the Baron of Hell that has a unique combination of rocket launcher & chaingun, creating a high threat target who can also be used to do immense damage to other enemies if played right. This was a custom sprite edit performed by Xaser on some previously exiting sprites, attaching a chaingun to a Cyber-Baron.

Then lastly, we have the final boss: the Archangelus. It was decided early in the creation of Eviternity that I wanted to explore the heaven theme, since the OTEX texture pack came with a decent amount of white marbles and gold metals, and ukiro was willing to expand on that set of textures. This lead to the decision of the final boss being a fallen angel, which is what the game's intermission texts cryptically refer to. The initial release of Eviternity reused the sprites from a past project of mine, Skulldash, but these were replaced in the final version by some incredible renders done by a good DOOM-buddy of mine called "Clay". Ukiro contacted a friend who works in sound design to create new sound effects which really help make this boss stand out from the crowd as something special.

SC: Let’s talk about the texture pack – how closely did you work with ukiro implementing his OTEX texture pack and what was your process like back and forth?

DF: Being given beta access to the texture pack was huge news to me at the time, I wanted to explore all the thematic options it presented and see what unique ideas could be produced with it. Once I’d decided Eviternity should be a megawad, deciding the themes I wanted to explore was the next natural course of action.

Below I include some words from the man himself, ukiro!

UKIRO: I had made a couple of thousand textures over the years, significantly more than what's in the original DOOM II. I figured there ought to be plenty to pick from so I was super happy when Dragonfly bit the bullet and decided to do a full 32 levels with them, as that would allow him to properly showcase the breadth.

That enthusiasm quickly turned into a bit of a panic for me when Dragonfly decided that two of the chapters should be set in wintery castles and heaven respectively, based on smaller themes I had barely made textures for. Ultimately, I am grateful he did that because it made the set more complete and it forced me out of my comfort zone a bit - and that's how you grow and improve. It's always a joy to work with someone who brings out the best in you.

During the development the mappers needed certain styles or variants of textures that I added as we went along, and as the themes started to gel a bit more, the levels gave me ideas for new textures that in turn spawned new map ideas. It was a really fun bit of symbiosis there, with everyone feeding off of each other's creativity. 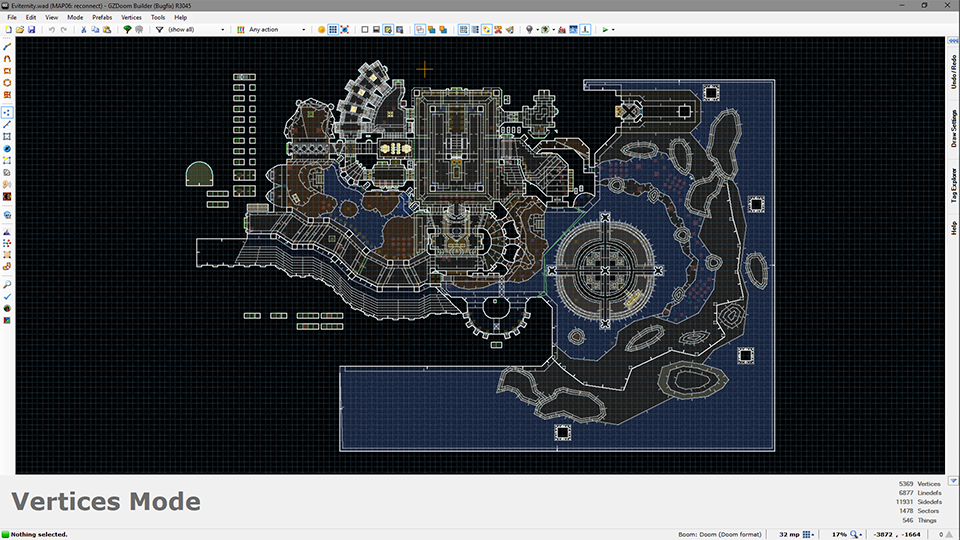 DF: So as ukiro stated, the experience was very much a synergy, where the textures enabled the mappers, which in turn enabled ukiro to make more textures. It was a really fun experience and having custom textures effectively “on tap” was an experience I’d love to have again and is something I certainly would never take for granted!

OTEX is very close to its v1.0 release now (and by the time this is published, it may well have already been released!), if you’re interested in using it for your own projects, pay a visit to ukiro’s website.

SC: Tell us about your music selections throughout the WAD

DF: The music was such a fun component of the wad to me, as it really helps to set the mood and tone for a map, and it’s also a chance to flaunt of the talents of a few of my DOOM buddies! If you’re interested in what specific tracks were used, take a look at Eviternity’s accompanying text file for the full list.

There are certainly some notable pieces of music to talk about though, in my opinion. There were about a dozen unique pieces produced for Eviternity, with a couple of tracks being created based on other tracks or songs.

Firstly, I’d like to give a huge shout-out to Jimmy (James Paddock) and Eris Falling (Tristan Clark) who helped make Eviternity’s audio experience as great as it is!

Jimmy is a master of MIDI and Eviternity features 15 of his works. Jimmy was always quick to say, “I’ll do it!” whenever a new track was needed and in some cases was able to produce new pieces of music in just a few hours. In fact, the piece he composed for MAP19 was written in about the same amount of time the map itself takes to play! Sometimes a pre-existing Jimmy track existed that was a perfect fit for a map I’d made but if ever some slight alterations were needed, Jimmy rose to the task.

For example, MAP21’s track, “Everything Explodes” had the in-your-face metal sound and quick startup that was needed for the first Hell map in the wad. However, the MIDI was a tad on the short side. When asked if he could add a ‘djent-ish breakdown,’ he rose to the occasion and padded the song out to become one of my favorites from the set. 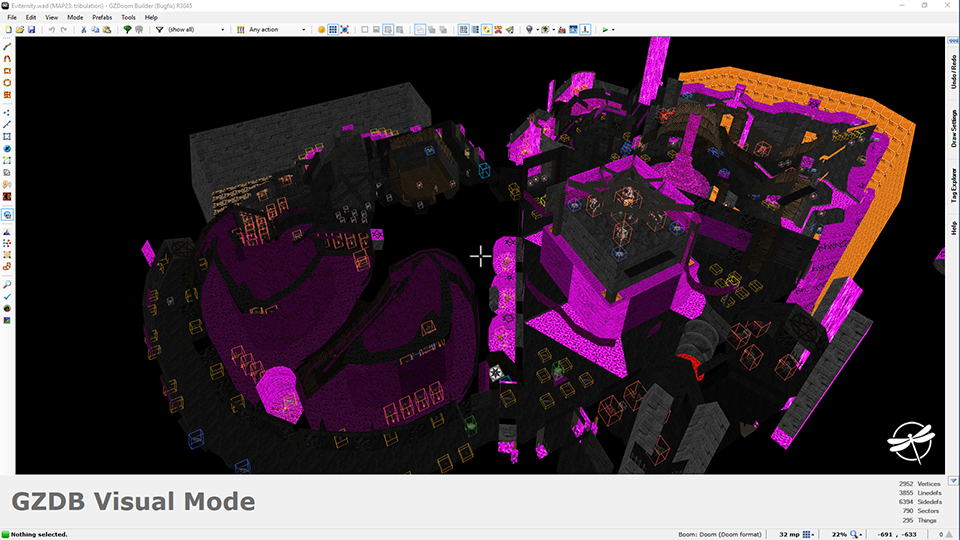 I could go on and on about Jimmy’s contributions, but let’s move on to some of the other musicians who contributed. Eris Falling composed the godly track named after the wad “Eviternity”. This is the only non-MIDI piece in the set, designed to give more emphasis on the final encounter against the Archangelus. Eris did some clever stuff here; for example, if you boot the map and run forwards immediately at the start to collect the weapons, the timing of the track lines up with when the outer walls of the arena collapse, creating this incredibly dramatic effect that is better experienced than explained.

Other notable contributors include a musician known as “Dial Up For Murder”, Kyle “Nabernizer” Dobson, Brayden “AD_79” Hart, Stewboy (known for the soundtrack to Skillsaw’s Ancient Aliens). We also used a few pre-existing tracks by Mark Klem and Alfonzo.

We’re not done yet – keep reading as the Slayers Club wraps up its interview series with Eviternity’s creator! Want to give modding a spin yourself? Try our article series on 5 Things Every DOOM Modder Needs!