Welcome back to another DOOM edition of Nods to Mods, where we sit down with community creators to get a closer look at their process! We’re so excited to be welcoming back modder Thomas van der Velden again so soon! This time it’s for a special treat…

Longtime fans of our Add-ons aren’t just looking for amazing levels with excellent weapon and enemy placement. They’re also hoping creators take on one of the greatest undertakings in the modding world: total conversion Add-ons! 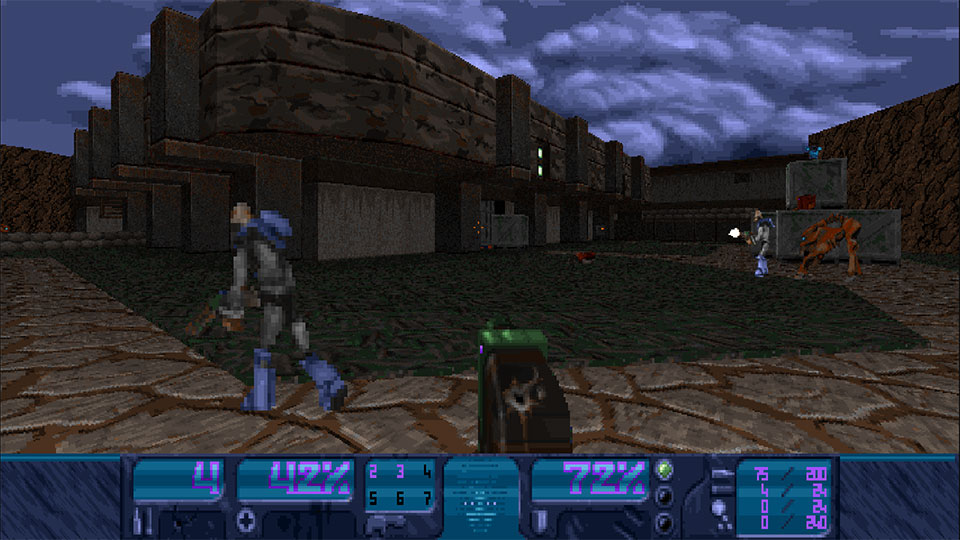 ICYMI – Check out Thomas’ Interview for their recently added 32-level Add-on Revolution! here. And in case you missed our other total conversion Add-on, get into the mind of Matthew “Revae” Little who created an unforgettable 32-level Norse-inspired adventure REKKR here.

THOMAS VAN DER VELDEN: Harmony started out as a map pack for DOOM (1993) with a few custom textures. As it grew, more and more textures were added until it didn’t feel like a DOOM setting anymore, but a world of its own. The project grew more ambitious and I decided to go the extra mile and make new monsters as well. Eventually all graphics and audio were replaced with original content. 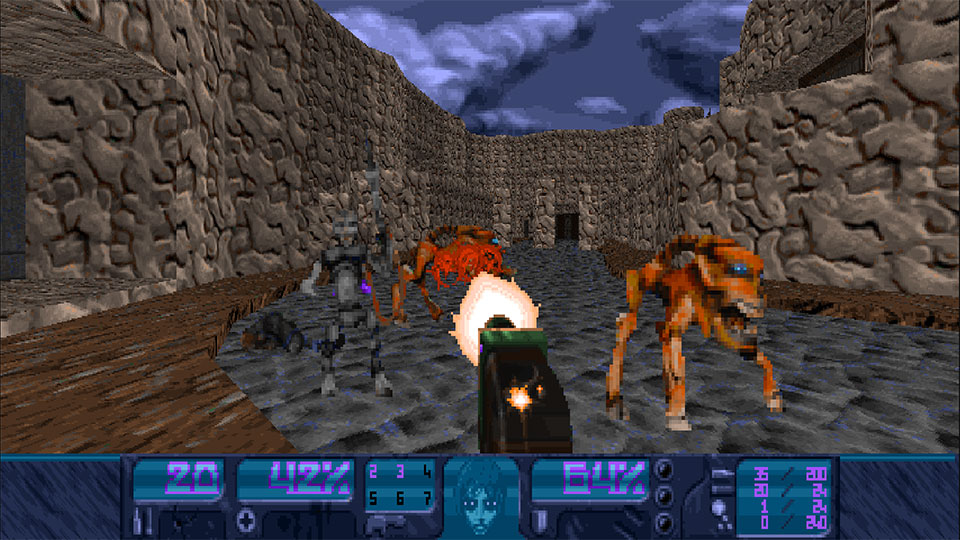 Harmony draws inspiration from post-apocalyptic sci-fi cult movies like the Omega man and Beneath the Planet of the Apes. Like many shooter games, it focuses on a setting/atmosphere and the story is secondary. For the game mechanics, it draws inspiration from 3D shooters from the ‘90s, like DOOM (1993) and Duke Nukem 3D.

SC: You’ve been given a lot of praise for your compact level design and awesome architecture. Where does that inspiration come from, and what is your individual approach to level design?

TVDV: Maps usually start with me thinking ‘How could I build that in a DOOM map?’ I wanted to push the limits of the original DOOM engine and create new features like exploding crates, shootable fire extinguisher, vending machines, moving train, fake floor-over-floor effects, etcetera. Somehow, mapping comes easy to me. Ideas keep flowing and I usually find solutions on how to make them happen. Sometimes it is a puzzle combining mapping, textures and (the DeHackEd editor). The reward for this puzzle is knowing I created something that would not have existed without my project. For me, Harmony is not just a game, it is an interactive artwork. A way to immerge oneself in a creative mindset. 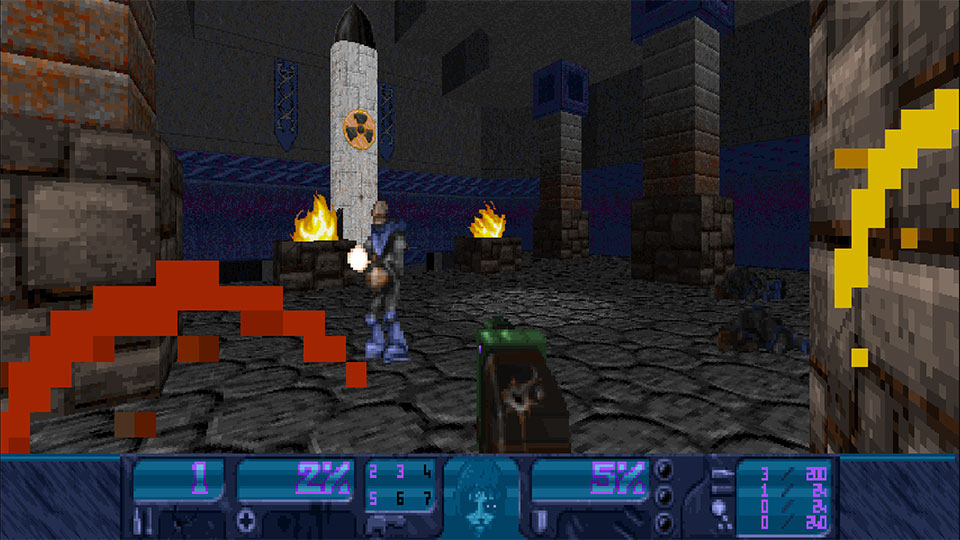 For the maps, I needed new textures. It was lot of fun creating hundreds of textures with a great variety of materials, ranging from concrete walls and rocks to giant fungi and cars. I made a custom color palette to make Harmony stand apart from DOOM. It adds to the unique post-apocalyptic and psychedelic look. Some colors in the palette remain bright regardless of the darkness of sectors. This allowed me to make glowing eyes and neon lights.

In 2022, I made two new levels (12 & 13). I used some resources from earlier projects and made everything fit with the style and story. Harmony is now a 13-map adventure full of action and exploration. With the new maps, it reaches an epic grand finale. 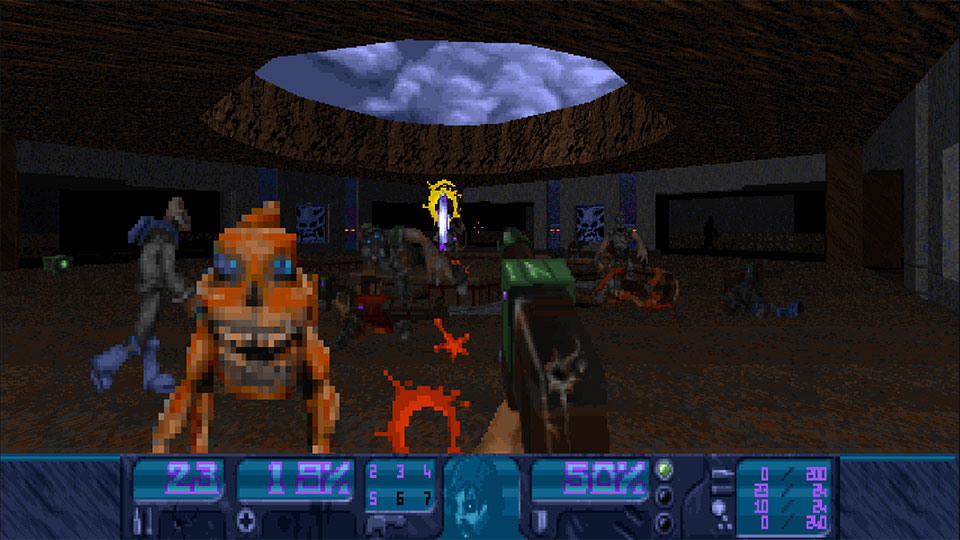 SC: Is it true that you and your brother collaborated on this project? If so, what was that dynamic like? Was it more akin to Noel & Liam Gallagher (Oasis) or Jonny & Colin Greenwood (Radiohead)?

TVDV: I only listen to MIDI music, so I don’t know these people… When it comes to Harmony, I wanted to do everything myself. While playtesting, Roland (aka ‘space is green’) said one of the screens needed more energy. I realized he had a point and wasn’t too proud to let him make the intermission picture and end screen.

Since these screens are outside of the levels it doesn’t matter that the style is different from the rest of the game. They add to the polished look of the game and somehow make it feel richer. Besides, it is cool to see another artist make artwork inspired by my work. 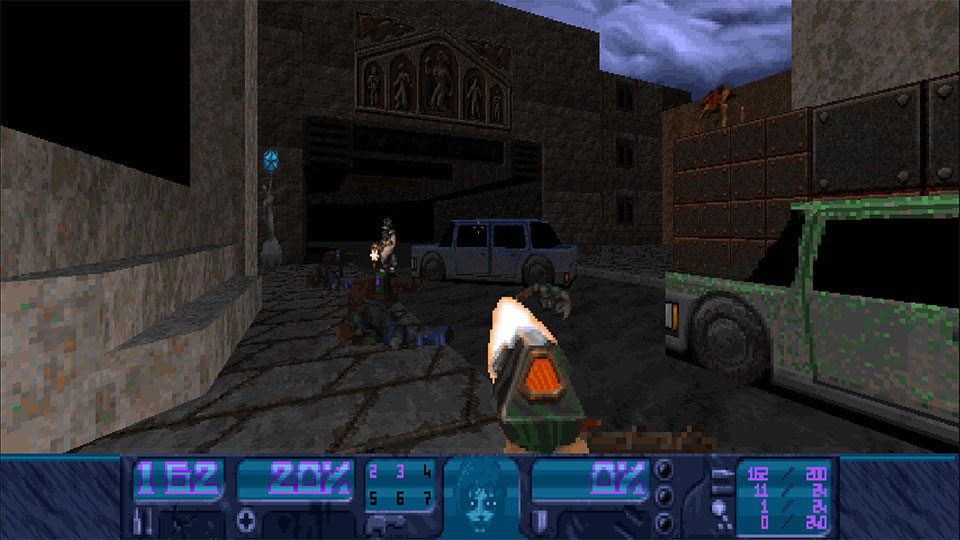 SC: After doing these Nods to Mods interviews for years, it feels like one surefire way you know that you’ve ‘made it’ as a DOOM Add-on creator is if you’re lucky enough to work with the prolific Jimmy Paddock. This is certainly the case for Harmony, so how did this collaboration come to life?

TVDV: Harmony was originally released in 2009 for the ZDoom engine. James liked it so much, he wrote a MIDI soundtrack for it. It is an amazing compliment to have someone so talented spend his time expanding on my project.

Now, in 2022, Harmony is compatible with the re-releases of DOOM (1993) and DOOM II and of course, I wanted to include the MIDIs he made. This version also includes two brand new maps for which James wrote two new tracks. 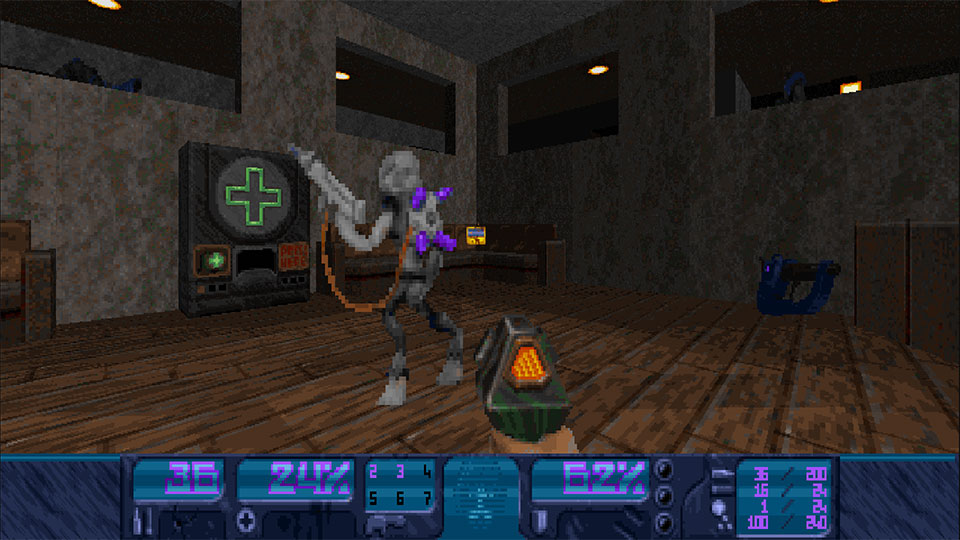 TVDV: Making enemy sprites is probably the hardest part of making a total conversion. Sprites consist of a large set of coherent frames with different poses from different angles. I made the Harmony sprites by photographing clay models, like a low budget version of how the original DOOM sprites were made. 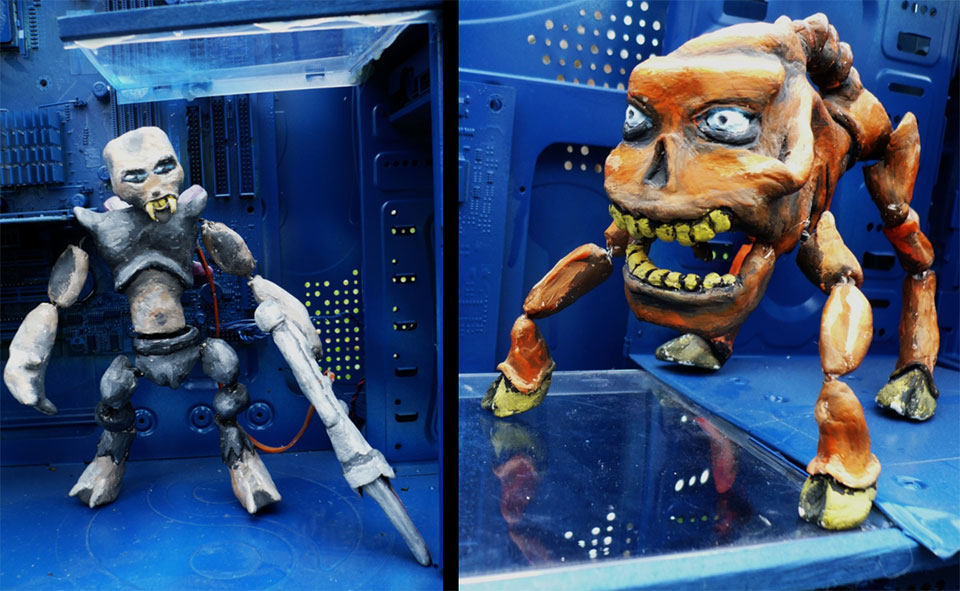 Back then I didn’t have any money but I had a lot of free time and creativity. First, I made clay models, which I then painted. They have an iron wire skeleton and the joints are exposed so they can be posed in different positions. With a (borrowed) digital camera, I took pictures to edit on my computer. 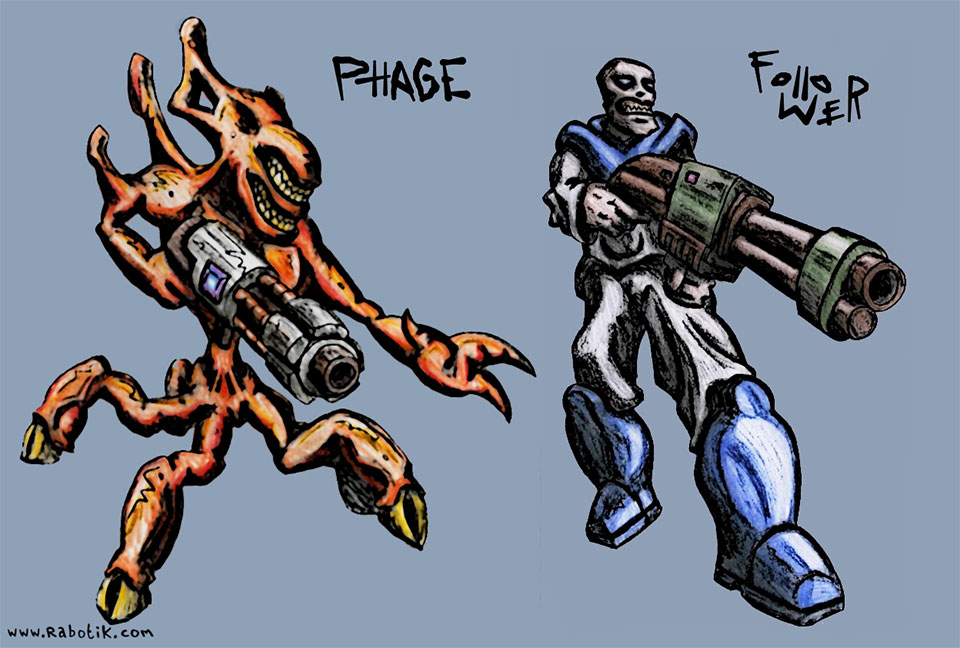 Digitally removing the background was the hardest part. There was software available that could automatically remove backgrounds, but it couldn’t make clean borders. In the game you see the sprites up-close, so every bad pixel is noticeable. The only way to get high quality results was to remove the edges manually. This was a lotof work since there are over 600 images. Then all images had to be brushed up afterwards - filling up the joints, adding glowing eyes, flash effects, etcetera. 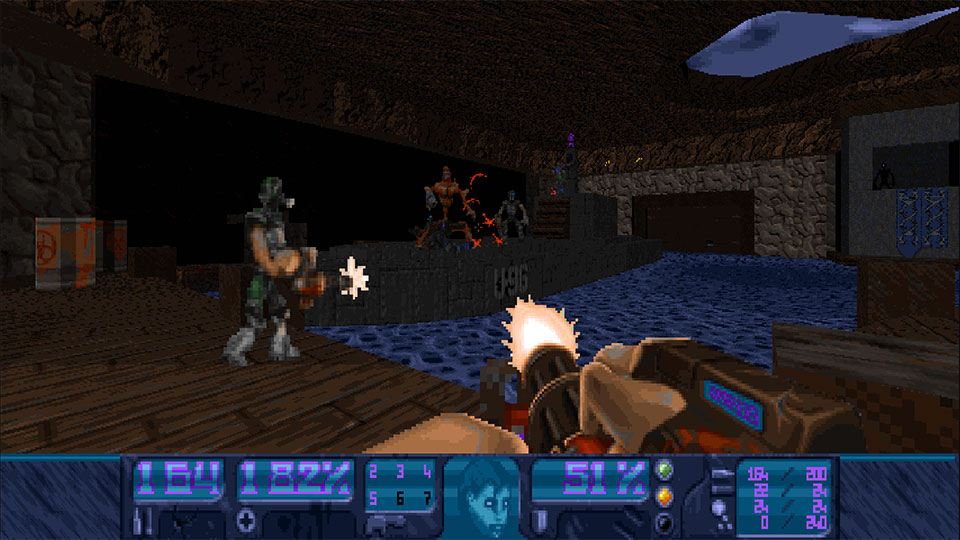 It was hard work, and I didn’t even know if it would work when I started. As far as I know, no other modder had made sprites like this. I remember the first time I saw my digitalized clay model (a Beasting) walking on the screen. It was amazing! Something I made was now ‘alive’ in the game and I could interact with it. It motivated me to keep going. 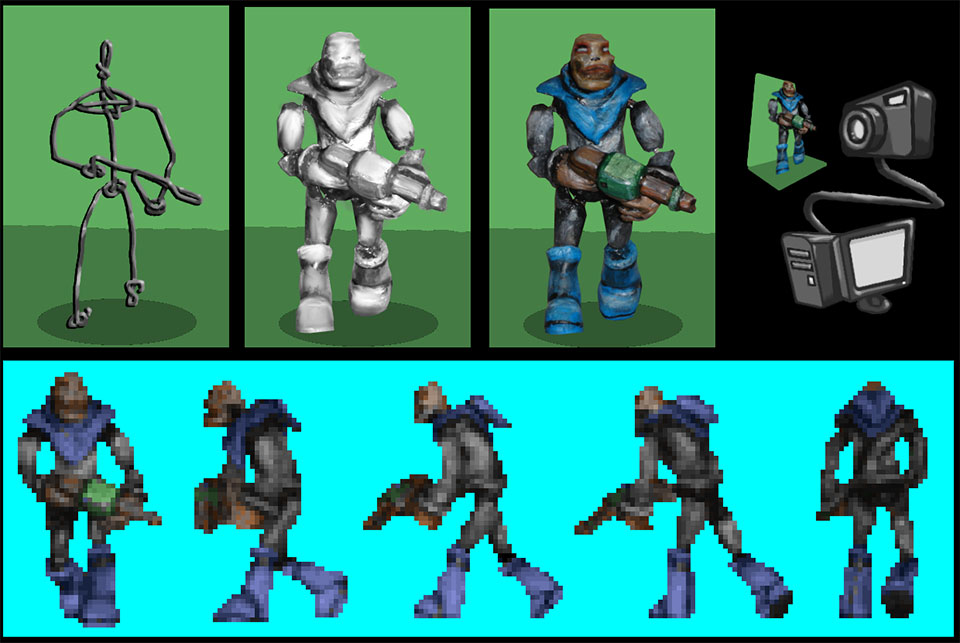 One of the original clay-models I made was not used in the 2009 release. It sat in a box for over a decade but now, I can finally give it a spot in the game! Map 12 & 13 feature this new flying enemy named the Aerosol.

The weapon graphics were made using simple 3D models and digitally drawing over them to add texture and details. The DeHackEd from 2009 caused a lot of trouble in the 2022 version, so I had to update and replace several features. The most noticeable are the weapons.

All the editors I used are free. There are too many to mention, but the most important ones are: Doombuilder for mapping. GIMP for graphics. XWE and SLADE for importing resources. Whacked for DeHackEd.

SC: How long did it take you to complete this amazing total conversion Add-on?

TVDV: Harmony was originally released in 2009 for the ZDoom engine. I had been working on it in my spare time since 2002. I spent an incredible amount of hours on it. For me it was a big artistic hobby and I learned a lot about game art and design. It was well received both in and outside the DOOM community and won a Cacoward in 2009. 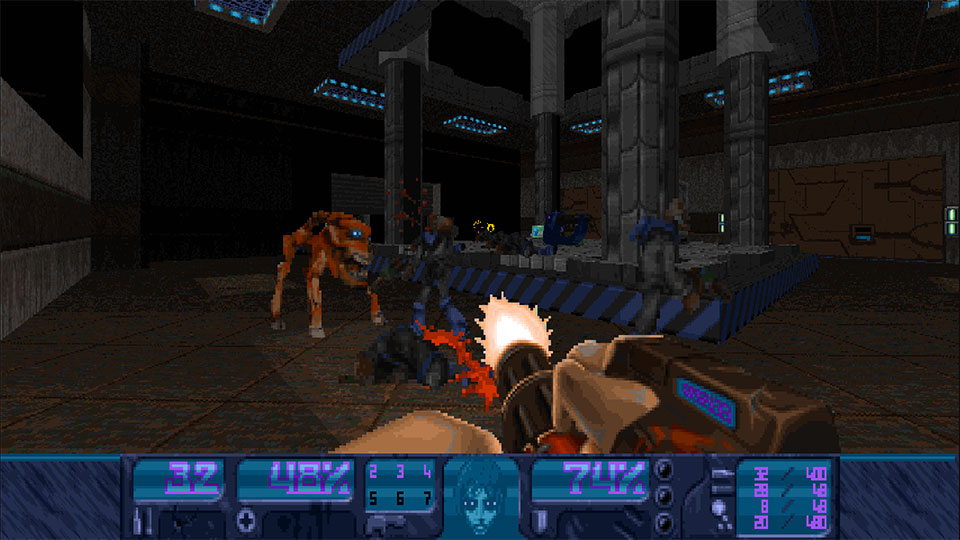 SC: Who are your favorite modders or team of modders in the DOOM community that have specifically made total conversion Add-ons and what’s your favorite creation they’ve made?

TVDV: I mentioned the Batman TC, Aliens TC and Delaweare before in the Revolution! article. They really pushed the boundaries of what is possible in DOOM modding. The DOOM community has always been full of creativity and positivity. Decades later, it is still very much alive and new features, tricks and possibilities are being discovered and invented. People are still releasing innovating things to this day! 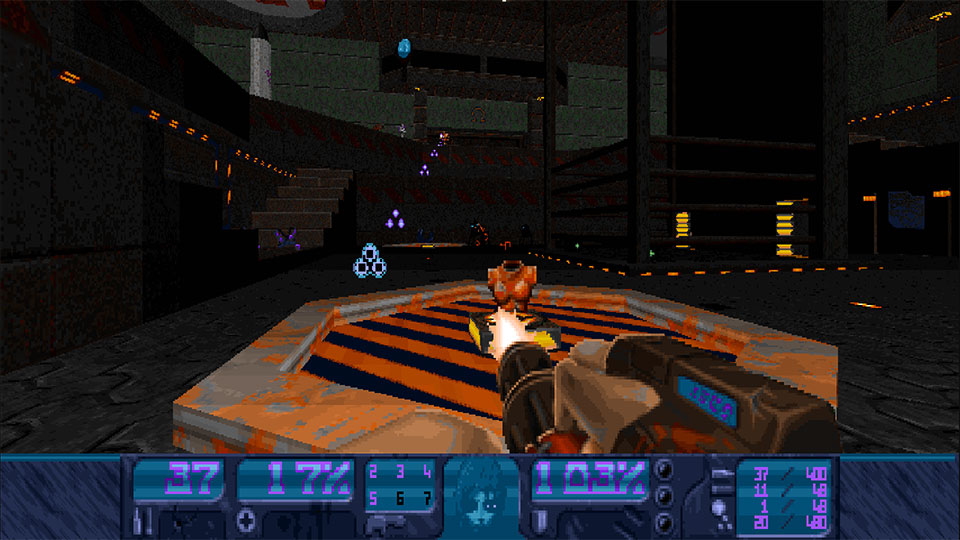 SC: Wanna give any new shoutouts? No time like the present…

TVDV: Thanks for having me back for this interview! Thanks to Kevin Cloud and Mike Rubits, and all others at id Software, for making this official release of Harmony possible. You have been very supportive. Working with id Software was an unforgettable experience.

Special thanks to Chad Mossholder for saving the day and providing the sound effects. Also, thanks to ‘space is green’ and James Paddock for their awesome contributions to Harmony. Thanks to Xaser for the last minute DeHackEd fixes! And the devoted people who make editors - without you, modding would not be possible! For more of my artwork please visit: www.Rabotik.com.

A huge thanks once again to Thomas for the insightful interview! Don’t forget, owners of our re-releases of DOOM (1993) and DOOM II can download and play Harmony via the in-game Add-ons menu today!