As DOOM continues to look back on 25 years of high-speed, unbridled demon demolition – and pushes forward to another outing in Hell with DOOM Eternal – it’s easy to see how the series has injected itself so deeply into pop culture, the industry and the minds of players who’ve experienced it.

"The DOOM brand in general represents not so much any specific game, but an attitude. You could even call it an emotional response,” says Creative Director Hugo Martin, describing the rush players feel playing DOOM – whether it was in 1993 or decades later.

“It’s exciting that DOOM continues on, and that it has a special place in the gaming world,” says id Software producer Kevin Cloud, who has been at the developer since his days as an artist on the original DOOM. "That it’s still in the mindset of gamers after all this time is cool - seeing what the team is doing with it today to keep it alive and make it something incredible has been awesome."

DOOM’s adrenalizing hallmarks, from juking away from an Imp’s fireball in the nick of time to overwhelming a massive demon through brute force (and a little chainsawing), have been a major draw for the series, and a huge inspiration that drove the development of DOOM (2016). 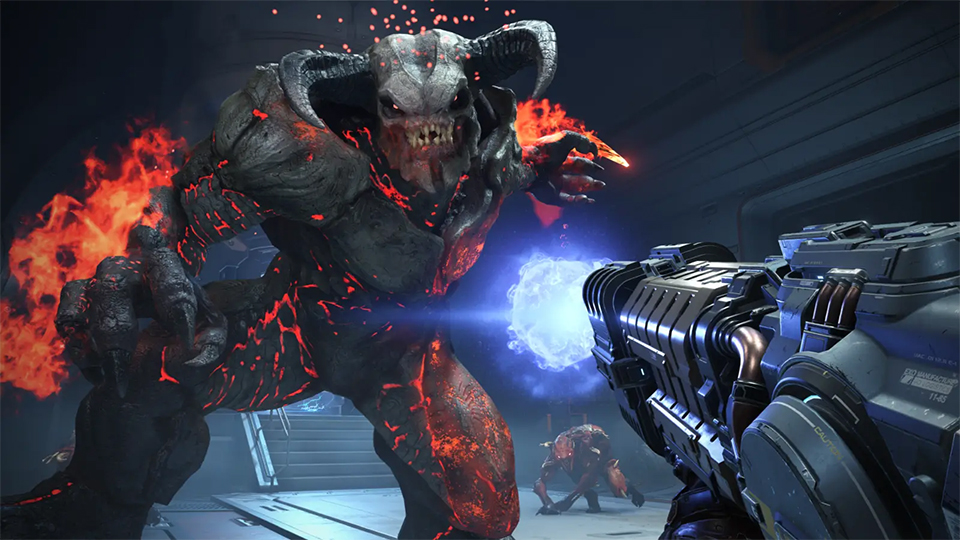 “Like, everyone screams, 'metal!' and 'f--- yeah!' and stuff,” describes Martin, “and I think that's a good thing to celebrate, especially now. It feels good to do that." Marty Stratton, Executive Producer at id Software, concurs. "It feels good to have fun!"

Though looking back at DOOM’s past has served well when making new DOOM experiences, embracing modern elements to make something completely new is a crucial element for id Software as well.

"We’re always inspired by the original games and we look back at those all the time, but you know we're always keeping our vision very much ahead of us,” says Stratton. “Like, what are we doing now? What are you making that's relevant now? What do gamers and fans want right now?"

As they prepare for their next trip into Hell with DOOM Eternal, the team at id has a lot of surprises up their sleeve. While there’s still plenty left unseen for DOOM fans old and new, there’s one thing players can count on, something the series has had since the age of MS-DOS: furious, unrelenting fun sent from Hell itself.

"It feels very good for us personally, and for the team, to be a part of something that makes people feel good,” says Hugo. “People have been screaming 'f--- yeah!' for a really long time - we're a part of that, and it feels great."