This week, we added yet another action-packed Add-on for owners of our re-releases of DOOM (1993) and DOOM II to enjoy. Our latest addition to the roster is Syringe, a seven-map wad collaboration self-described as “about reviving a dying universe using guns and large pointy things.”

We got in touch with three of Syringe’s creators – Tarnsman, Pavera and Nods to Mods alum Xaser – for an exclusive behind-the-scenes on our latest Add-on inclusion. 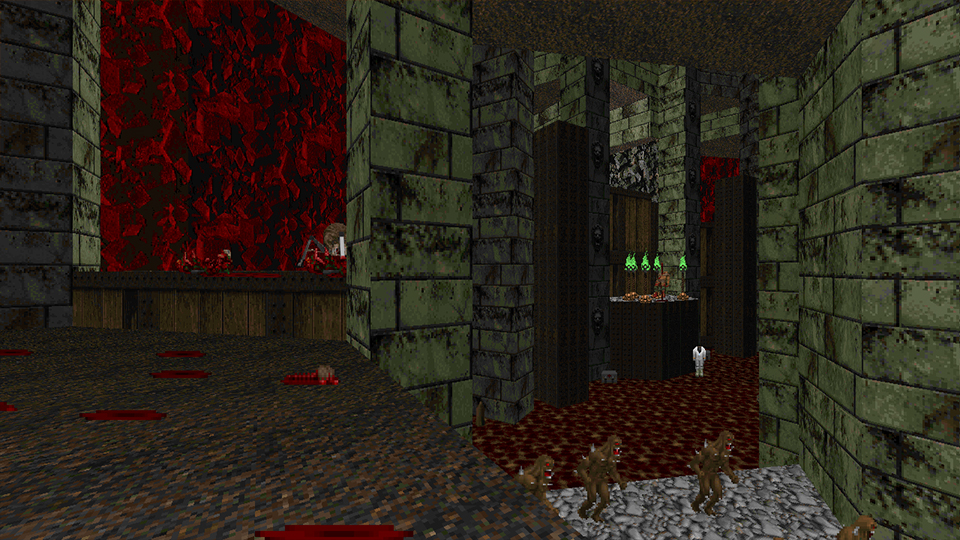 SLAYERS CLUB: What was your main inspiration for Syringe?

TARNSMAN: Syringe originally started out as a different project that fell to the wayside and was resurrected by Xaser to be completed as a smaller project. It was originally envisioned as a sequel-in-name-only to No End in Sight following the same design of making IWAD style maps without conforming to the same rigidity as the Doom The Way id Did projects. The project team was originally going to be much larger but after only four finished maps and one partially finished map was made for the project it died until being revived as Syringe.

PAVERA: I just wanted to give three of my maps a loving home. But for real, we genuinely just wanted to inject players with a short and sweet bout of classic DOOM. A booster shot for the community, to keep them enthusiastic and inspired.

XASER: On that note, the name and theme have nothing to do with COVID-19, believe it or not. I came up with the name a few years back; one of the most well-known DOOM mods is named "Scythe" and I was trying to think of another sharp object that starts with 's', hence "Syringe." And then we released the mod right as the pandemic started and now it's becoming an Add-on right as everyone in the US is getting vaccinated... what a weird, weird world.

SC: Was this your first collab?

PAVERA: Nope! I collaborated with another friend, Jazz Mickle, on a map called Compactor, which was released as MAP08 in a set called Mutiny. That was back in 2016 or so. I still cite it as the most fun I ever had making a map and I think it's some of our best work.

XASER: The Syringe team is kind of a "supergroup" -- we've all been modding for a while and have crossed paths more than once. All of us contributed to either BTSX or Doom (2) the Way id Did (or both!), so we're a bunch of grumpy grizzled veterans at this point.

SC: How big was your team to make Syringe?

PAVERA: Just the few of us. Originally it was just me and Xaser deciding to pick up the pieces of an old project (with Tarnsman's blessing for his work) and slam ‘em together. Then progress stopped for a metric infinity, until Marcaek saved the day.

XASER: There's a rather large cast of "supporting characters" -- the project features textures from DOOM community staples Cage, Amuscaria, and rf', and it's got an awesome MIDI soundtrack by Psychedelic Eyeball, though all of those folks are less active contributors and more folks who made random stuff I liked (and gave us permission to use it, of course). It's less of a team and more of a ragtag group of incidental participants, really.

Also, I'm so happy I've gotten others to start saying "metric infinity". It's scientifically important to state your units!

SC: How long did it take you all to complete this pwad? And how long is “one metric infinity”?

XASER: Doing some quick napkin math based on Syringe's and DOOM Eternal's overall development times, One metric infinity is about 1.75 imperial Eternals. 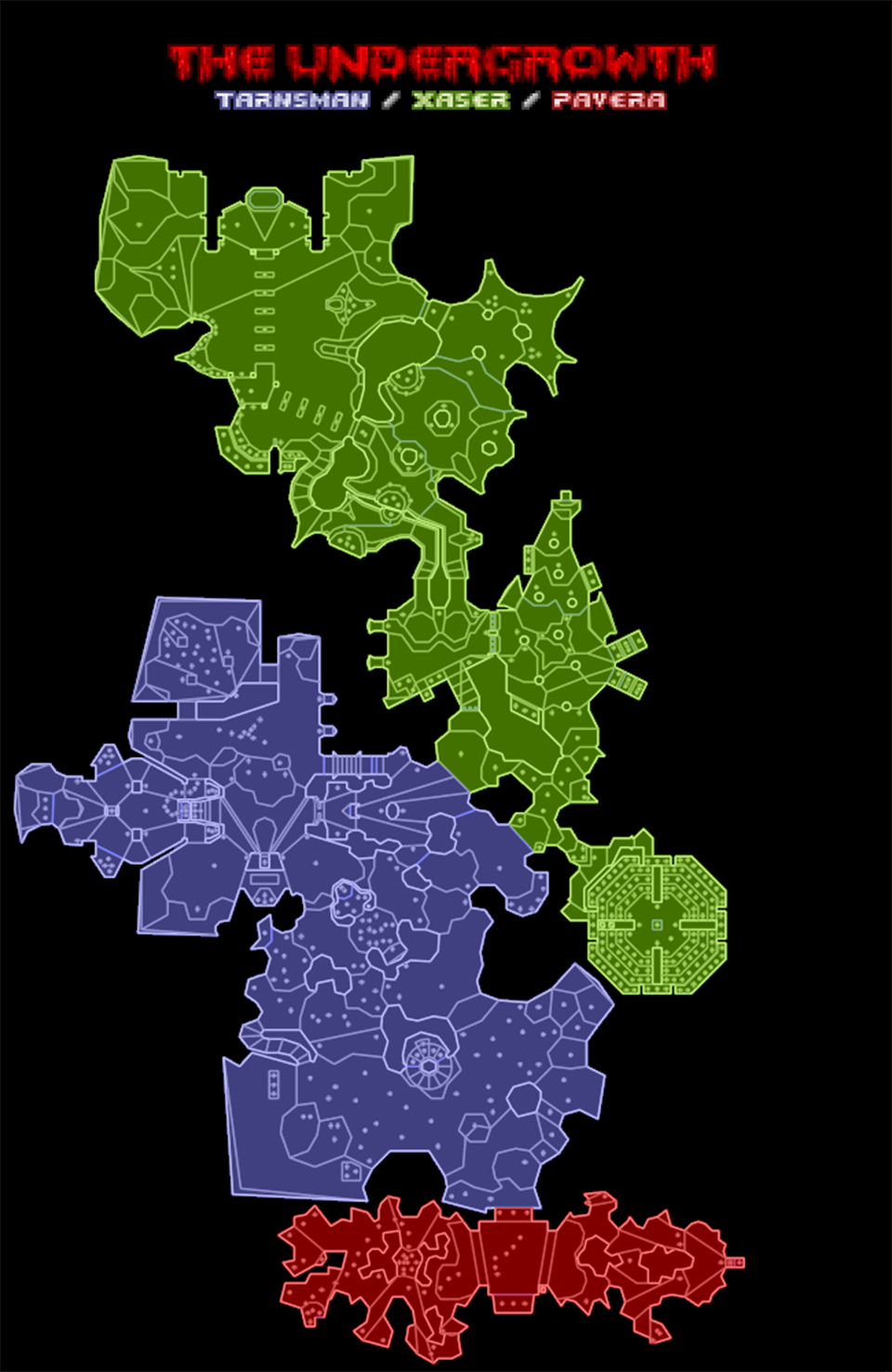 SC: Who did what on this seven level team-up?

PAVERA: I created MAP02 ("Hell Spoke"), MAP04 ("Banana Export"), and MAP05 ("Blast Off!") from scratch on my own many moons ago. We all sorta had our hands in everything though, including Xaser's crafty hands on my own maps. I created a small area on MAP03 ("The Undergrowth") and did some of the initial monster placement, and on MAP01 ("The Well") I provided a few gameplay scenarios as well. I think I was the one who stuck the Archvile in the blood pool that you have to grab the red key from, but I can't remember completely. The only map I had no real hand in creating was MAP06 ("Acheron's Needle"). That was all Xaser and Marcaek.

XASER: The big irony here is that MAP01 and MAP03 are a couple of Tarnsman's partially-done maps that Pavs & I finished up, while MAP06 was supposed to be my main contribution but ended up being a partially-done map that Marcaek finished up. "Pay it forward", as they say.

SC: What tools did you use to create this pwad?

XASER: Doom Builder X, SLADE, and my trusty copy of Paint Shop Pro 7 that turns 20 years old this year. What happens to programs when they reach drinking age, I wonder? 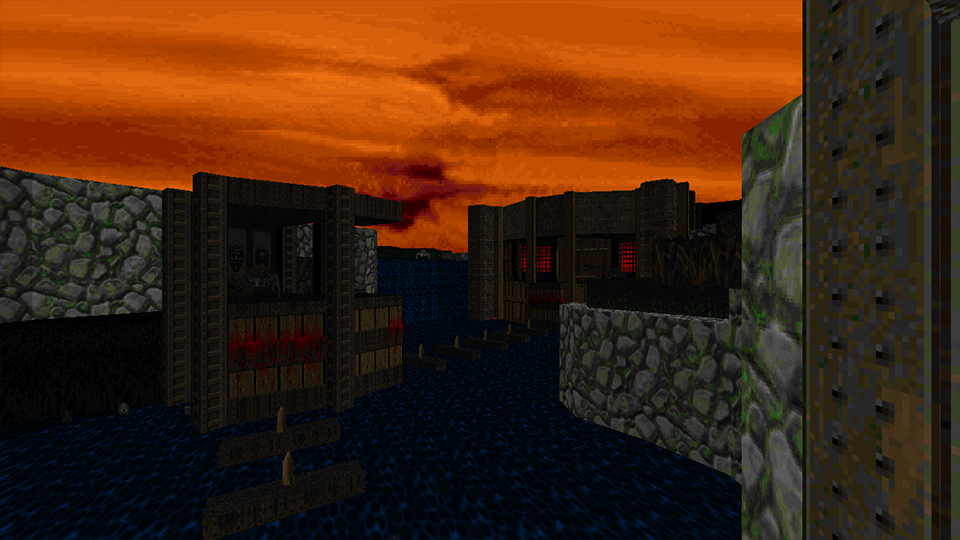 SC: What is your team’s approach to level design?

PAVERA: I can't speak to the design process of the others but generally speaking, we all sorta did our own thing. I tend to just open up DBX and start drawing lines until I like what I see. I never plan anything ahead of time, except maybe a basic theme.

XASER: I usually just throw stuff at a wall and see what sticks, but a bit chunk of Syringe was "collaborating" with an author through time by working on a map they'd started long ago. For that sort of work, I try and identify the map's "quirks" -- any odds n' ends that make it unique or unusual -- and amplify them, rather than try and just tack on my own brand or whatever.

MAP03, for instance, had a natural rocky theme with plenty of nooks and crannies for ambushes, so I took that, threw in some forest-y sections, and absolutely loaded the map with sneaky traps. No, there will not be any apologies. ;)

SC: How long have you all been making DOOM mods/levels?

PAVERA: I've been making maps going on 15 years now. My earliest levels I just passed around to old internet friends, and it wasn't until 2009 or so that I started sharing them with Doomworld. I caught a lucky break and managed to get a map in BTSX E1, which I think sorta launched the 'serious' phase of my mapping career.

SC: What were your first experiences with DOOM?

TARNSMAN: Playing DOOM as a kid in the 90s’ when it first came out. Fondest childhood memory of DOOM would be using the family computer and trading off when with my father every time one of us died (and every time he wasn't looking, toggling the IDDQD cheat on and off to quickly give myself 100% health so I could play for longer.)

PAVERA: I've been playing DOOM since I was probably 2 years old. My dad used to sit me on his lap while he played and let me hit the spacebar to open doors. Since then it has been a staple of my life. The layouts of all of the maps across DOOM and DOOM II are etched into my memory.

XASER: My first time playing it was in 1997, but come to think of it, I do have a weird false memory that pre-dates that... I remember watching my dad play the game when it first came out in '93 (that part is probably true at least), and I distinctly recall watching him traverse the opening area of E4M6... which is impossible because Episode 4 wasn't a thing until Ultimate DOOM's release in '95. Memory is a silly thing. 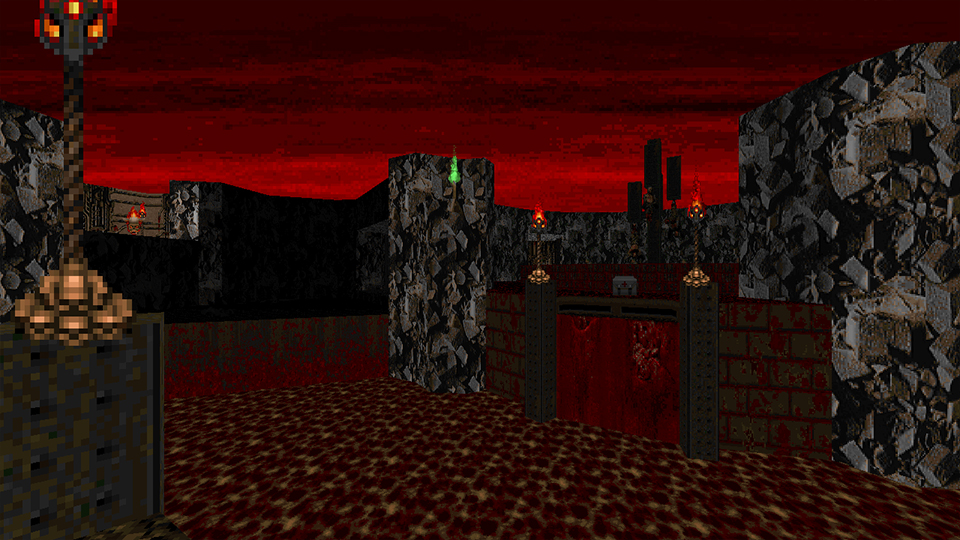 PAVERA: I'm not exactly sure what first got me interested in level design, but somewhere around 2007 I started making DOOM maps for a small circle of online friends. I found that I really liked doing it, and after a while I worked up the nerve to show some to the proper DOOM community. To my shock and awe, they were actually well received, and that gave me the motivation to keep mapping.

TARNSMAN: Revisiting DOOM and playing user-made levels and deciding to try my hand at it.

XASER: Been hacking apart games ever since I was a kid, and DOOM was the one that stuck.

Funny story with Tarnsman's answer, though: when he first showed up on the scene, his maps were so good that a few of us suspected it was a fake account made by some other well-known mapper, 'cause nobody's first maps are as good as the screenshots he was posting. We were wrong, of course, and nowadays Tarns claims those early maps totally suck (he released 'em as "Suitcase of Gor", for the curious). Maybe he's right, relatively-speaking at least, since he keeps churning out masterpiece after masterpiece for like six zillion different projects at once. There's a reason the phrase "release the Tarnsflood" has become a staple phrase among a few of us DOOM mapping geeks. Dude's a machine.

SC: Who are some of your favorite modders or team of modders in the DOOM community and what’s your favorite project they’ve done?

PAVERA: I always cite Mapgame by rf' as one of my greatest mapping influences. It just really spoke to me at a time where I had a lot of creative energy, but wasn't sure how to channel it. I saw their maps and thought, "I want to make this".

XASER: My answer from last time 'round still stands (NaturalTvventy and his "Beginning of the End Part 1"), but to shout out something new that caught my eye recently, msx's "Time Tripper" is bloody friggin' amazing. It's beautiful, has a killer soundtrack, and it's even got a proper webpage for the release instead of a plain ol' forum post. A+ presentation, that one.

SC: Wanna give any other shoutouts?

PAVERA: Shout out to my friend and collaborator AD_79, who is destined to become the next MIDI powerhouse. And another shout to my buddy kprice, who always DMs me on discord to ask me how my maps are coming along. Aaaaand one more to Jimmy, for just always being willing to help me when I am completely helpless.

TARNSMAN: Xaser for being a Xaser