DOOM’s 25th anniversary is the perfect time to celebrate not only the franchise, but the fans who helped shape DOOM into what it is today. That’s why we created the Slayers Club - a place to bring DOOM players old and new together as one community.

Regardless of which DOOM was your entry point into the series, each member of the Slayers Club remembers exactly how they became a DOOM fan. Take superfan Sargeant Ranger Lopez for instance – yes, he assures us that’s his real name. We talked with Sargeant about his love for DOOM, his annual "Month of DOOM" tradition and what makes the series so special to him in this Slayers Club community spotlight.

“I never really stopped to think about how long DOOM has always been a part of my life,” Sargeant said. The majority of his life was spent playing DOOM, starting when he was just a kid. “A friend of the family had two older sons and they would babysit me. The oldest spent the most time with me and taught me how to play games on the computer.” That introduced him to a brand-new gaming experience: DOOM (1993).

For Sarge, DOOM was a game unlike any other with its unique characters, heart-pumping soundtrack and 3D graphics. “The visceral combat accompanied by the death metal sounds overwhelmed my adolescent young mind, leaving me foaming at the mouth for more in a hypnotic trance.” 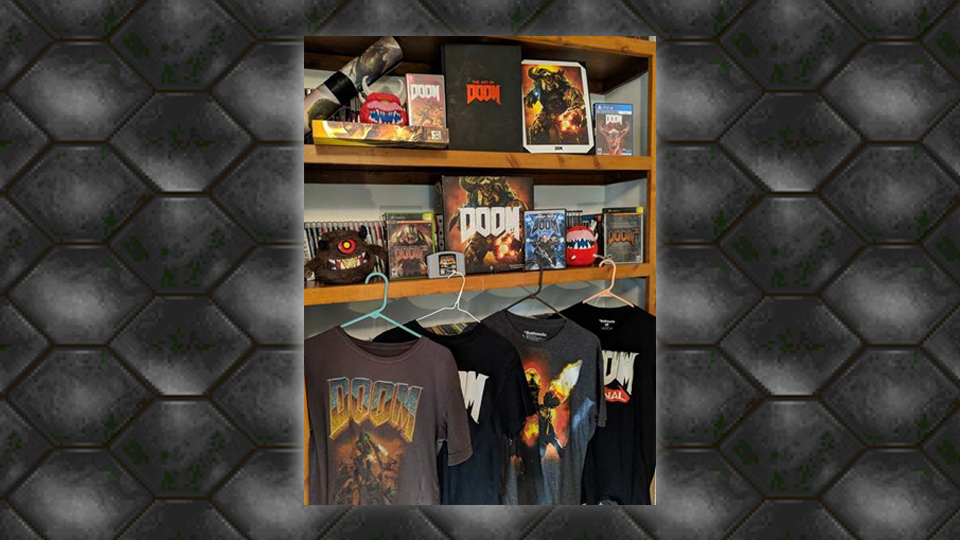 As he grew up, Sarge described his childhood as being somewhat isolating, partially due to being homeschooled. “I never had the traditional high school experience growing up, never had a chance to have a crush or high school sweetheart. Never had a group of friends to hang out with on the weekends. Didn’t do anything daring or worthwhile.”

Sarge remembers a particularly difficult Halloween night growing up. With his father deployed and his mother at work, he found himself home alone. “Looking out the window and seeing people walking up and down the street, enjoying the night in goofy costumes, hearing loud music from the crazy party across from my house being thrown by college students made me feel left out.” As a distraction, Sarge looked through his collection of games to find something fun to play when finally he stumbled on a copy of DOOM 3, a game he bought years prior. “After flipping through my options, there he was, the Hell Knight on the DOOM 3 cover art staring me down, screaming.”

Sarge played DOOM 3 all night to distract himself from his feelings. “The visceral combat accompanied by the death metal sounds once again overwhelmed my teenage adolescent mind. Hours flew by and my depression melted away as it did all those years ago when I first entered the world of DOOM, forever changing my life once more.”

It was then that Sarge remembers becoming a DOOM superfan. “It was all just bliss. I didn’t think of anything else that would have troubled me that night because I was having my own fun.” He played the entire night and beat the game, only to realize it was 7am. He couldn’t believe it – literally – so he looked out the window to make sure it was daylight. Sure enough, it was morning, and the hungover guests leaving the party across from his house served as proof. “The grass is growing too loud!” one of them shouted.

Sarge fondly remembers the impact the game had on him that night and vowed to play a DOOM game every year because of how happy it made him. “I played DOOM every year in October leading up to Halloween night for the grand finale,” Sarge recalls. His yearly “Month of DOOM” celebration began. “It was just a thing I did and still do 14 years later to this day.” 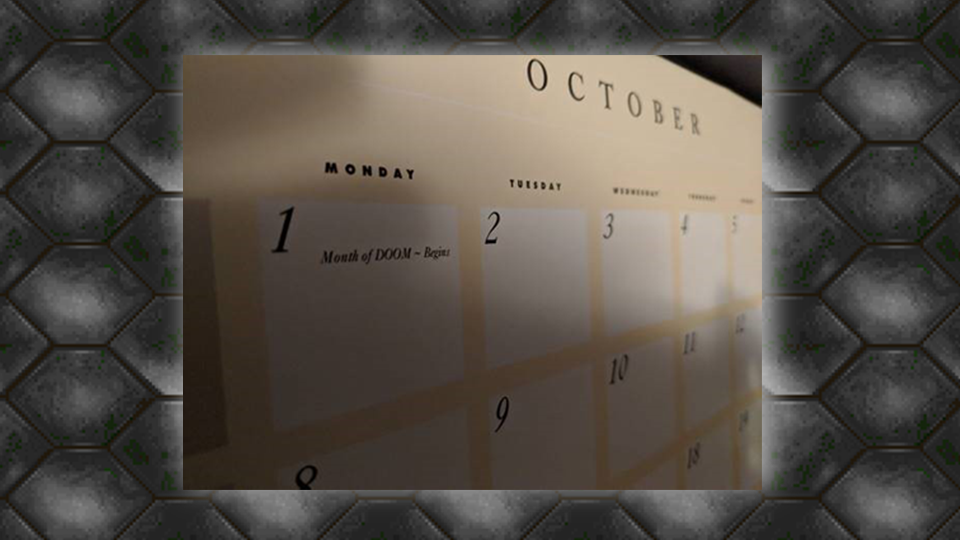 After years of repeating the game each October, he started to get pretty damn good. “I could kill the demons before they could ever spawn.” His love for DOOM 3 wasn’t just centered on the fun and the gameplay. He credits DOOM 3 for giving him a newfound confidence that he used to do more things outside of his comfort zone. He attended live metal shows for artists like Marilyn Manson and took trips to NASA to learn about upcoming missions to Mars. “I eventually had my own group of friends I could hang out with over the weekends, had my own crazy parties. I, too, could complain how loud the grass was!”

His Month of DOOM celebrations continued, but soon it would be time to put DOOM 3 aside for something new. “When DOOM (2016) was getting ready to come out, I felt like a kid on Christmas morning,” he remembers. “Over 10 years of celebrating the Month of DOOM and playing DOOM 3 for most of that time, I finally had a new DOOM to play on the horizon!” Sarge’s new yearly tradition got a head start when the game launched in May 2016. “I spent the whole day playing it non-stop. I beat it the same day it came out.”

As he continued his yearly Month of DOOM celebrations, the people in Sarge’s life got wind of his tradition and started to show their support by surprising him with DOOM-themed gifts that he would add to his ever-growing DOOM collection. “I had gotten some really interesting merch I never knew existed,” he remembers. “Even my Father tried one year and gifted me a random purple skull because he thought it was DOOM enough. I admired his tenacity.”

Soon, his collection of DOOM merchandise turned into an impressive shrine of DOOM memorabilia thanks to his family and friends. “If I had to pick my favorite piece of DOOM memorabilia, it would have to be anything that anyone has ever gifted. Because they took the time to share in that moment on passing on the love of DOOM, or at the very least celebrating with me the joy surrounding it.” 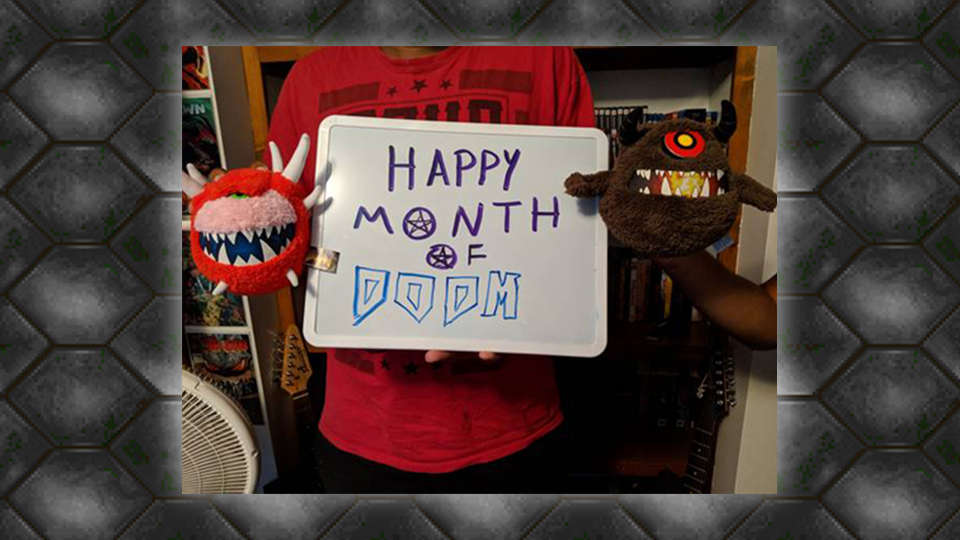 It wouldn’t be long before Sarge turned his attention to the next game sure to take top billing for his Month of DOOM celebration. DOOM Eternal was revealed at E3 2018 with a full gameplay reveal slated for QuakeCon just a few months after. “Something inside me told me to make the journey,” said Sarge. He booked his flight to Texas and made it to his first QuakeCon. “Never would I have imagined that I would make it here one day,” Sarge recounts. “I felt like a kid again.”

Sarge remembers barely being able to sleep, the thought of the gameplay reveal happening the next morning. “I just kept tossing and turning all night in bed unable to sleep like a restless child on Christmas Eve,” he recalls. The morning of the reveal, Sarge rushed down to be the first in line, exhausted and running on fumes, only awake from a mix of adrenaline and two energy drinks. After waiting hours to be the first one in the door, he spotted id Software’s Studio Director, Tim Willits. “For the first time I am starstruck,” said Sarge. “He has no idea how much DOOM means to me.”

“Well, I’ve got to have a picture of the first person in line to see DOOM Eternal,” Tim said to him. They snapped a photo as Sarge continued to wait eagerly. Finally, the doors opened.

Sarge found a spot in the front row, positioned near the stage and the massive video monitors so he could see all the action. “I along with everyone else roared in excitement. The house lights went dim and the music was in full effect and building up, the bass was thumping in until the DOOM Eternal logo finally appeared roaring with the now iconic guitar solo and faded away revealing a world that has forever changed my life.”

The gameplay reveal of DOOM Eternal brought back a flood of emotions for Sarge. “All the fun I had and all the friends I made, then and now, DOOM was always there in some way. It’s helped me get through some tough moments in my life and over time, DOOM became a part of me and who I am as a person.”

Sarge reflected on his many DOOM memories, which have made him into who he is today, and continue to impact him into the future. “You can’t just pick one memory out of 25 years and call it your favorite. They all matter.”

Thank you, Sarge, for taking the time to chat with us about your fondest DOOM memories! By the way, Sarge. We’re sending you a special DOOM poster signed by the team at id Software. We think it’ll look great in your collection!